The European Ryder Cup stalwart displayed the differences in Instagram versus reality with wife Helen. 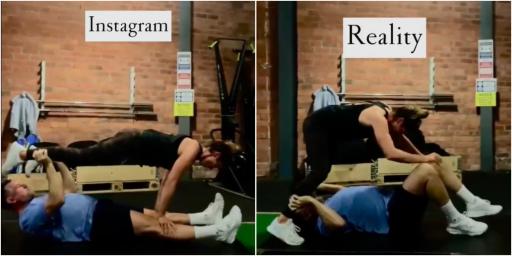 When it dawned on Lee Westwood he had likely played his last ever Ryder Cup match he choked up.

I don't want it to be my last, Westwood confessed to the world as the United States' side got boozy.

In 2021 Westwood defied father time by playing his way into the team.

That was in part down to just how hard he worked off the course.

MORE: HOW WILL PGA TOUR RESPOND TO GREG NORMAN?

He has constantly kept his social media followers updated on his fitness exploits.

We've seen images of Westwood, now 48, dripping in sweat as he looked to keep himself in shape during the coronavirus lockdowns.

He's also jokingly called out Bryson DeChambeau by brushing up on his speed training with son Sam.

So it's no surprise Westwood would try out a bit of yoga.

It is clearly a difficult thing to do and requires a lot of core strength.

Westwood has posted a video on his Twitter profile showing himself his wife Helen trying out one particular pose.

He lets his followers know the differences between Instagram and reality.

As the pair fail and fall to the floor a cracked version of "My Heart Will Go On" can be heard.

NEWS: GOLFER BUYS A SCOTTY CAMERON AT A JUNKYARD FOR $1

NEWS: THIS IS WHY XANDER SCHAUFFELE DRIVES AN OLD CAR