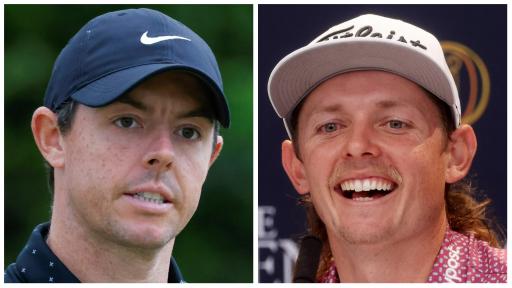 Cameron Smith has revealed how Rory McIlroy phoned him just days after he won the 150th Open Championship at St Andrews, urging him to remain on the PGA Tour instead of jumping ship to the Saudi-backed LIV Golf Tour, according to an interview with Sydney Morning Herald.

Smith, 29, had been heavily linked with a move to LIV Golf all summer, and the rumour intensified further when the Australian was asked about it all just minutes after etching his name on the famous Claret Jug this July.

"I just won the British Open, and you’re asking about that [a potential move to LIV Golf]. I think that’s pretty not that good," replied Smith at the time.

The very next month, it emerged Smith had indeed taken the big bucks to join the breakaway circuit run by his compatriot Greg Norman.

The figure of Smith's deal was estimated to have been in the region of $125-150 million.

It was arguably the biggest signing to date for LIV Golf, along with the likes of Dustin Johnson, Brooks Koepka, Bryson DeChambeau, Sergio Garcia, Patrick Reed and Phil Mickelson.

But in an exclusive interview with Sydney Morning Herald this week, Smith explained how he certainly hadn't made a concrete decision on leaving the PGA Tour for LIV Golf during the week of The Open Championship.

LIV Golf was always the front runner, though.

"I was definitely leaning one way, but it wasn’t signed on paper. There was still so much stuff to do, and so much to think about."

A call from McIlroy, who finished third behind Smith at The Open that week, certainly complicated things further.

At least for a short while.

Of the phone call with McIlroy, the Australian said:

"I’ve always had respect for Rory and I’ve liked what he says on the golf course.
"He said, ‘congrats’. There were maybe a couple of little jabs in there. He was happy I played well and it was a good tournament.
"Then we talked about the PGA Tour and LIV. There was a bunch of stuff he wanted me to know before I made my decision.
"I wouldn’t say he tried to directly talk me out of it, but he definitely wanted me to stay."

After the call with the current World No.1 player in the world, and others, Smith admitted he was having restless nights as he continued to mull over his decision.

"It felt like I didn’t sleep for a few months.
"I was constantly thinking, ‘what will other people think?’ That was a really big factor for me.
"I feel like I do most things by the book and to be one to step away ... was really tough for me."

Smith eventually made an official decision to join LIV Golf a month later at the end of August with a host of other players coming from the PGA Tour.

Smith wasted little time in proving his class on the Saudi-bankrolled tour as he took the LIV Golf Chicago tournament by three strokes in September.

Smith was speaking to Sydney Morning Herald ahead of returning home to compete in the Australian PGA and Australian Open over the next couple of weeks.

No Australian tournaments on the PGA Tour, despite a large presence of Australian players on the circuit, was one Smith's biggest frustrations about the PGA Tour.

"For me, the PGA Tour is a great place. It’s a great tour that does really good things.
"But as you look back, Adam [Scott] has been one of the best golfers in the world for 20 years and I just think it’s really weird for them [PGA Tour] to not have an event [in Australia] just because of him.
"Then you have Jason [Day], Marc [Leishman], there’s a bunch of guys they could have done so much for. The Aussie crowd gets around it so much...
"But I just don’t think it’s that profitable for them and that’s kind of the reason behind it all."

Next Page: Tiger Woods once billed fellow pro $25,000 for spilling red win in his private jet!