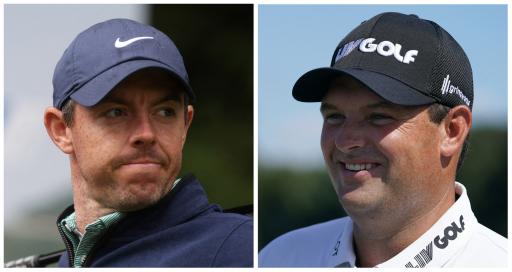 We'll have to wait until later in the week to see what - if anything - McIlroy has to say about the reported exchange between the pair on the range in Dubai.

McIlroy previously grew sick and tired of fielding questions about ripping his shirt at the DP World Tour Championship so who knows how he will react to this.

Reed, 32, was described in various reports of apparently standing next to the four-time major champion for several seconds on Tuesday with the intention of saying hello.

But when the American LIV Golf player was disregarded by the Ulsterman, he left unimpressed.

So much so that after reportedly 'saluting' McIlroy's caddie Harry Diamond, he lobbed a tee in the direction of the Northern Irishman.

Pepperell is also at Emirates GC this week for the Hero Dubai Desert Classic on the DP World Tour.

He reacted to the apparent snub with a piece of classic, dry wit.

His comment is in reference to the fact that Reed is currently suing several members of the golf media, alleging defamation.

On 17 January, Reed's attorneys also threatened CNN with a $450m lawsuit over a segment that was recently aired.

They wanted an on-air, public apology over the video that was titled:

The network responded by it as a "frivolous lawsuit", adding:

"Whose aim is to chill free speech and intimidate journalists from covering important stories about the Saudi government and the Saudi-backed LIV golf tournament. CNN will aggressively defend its reporting, which did not even mention the plaintiff in its coverage."

It’s so strange walking past a guy this week, playing in the same event as him, when this sort of shit is going on. Utterly bizarre.

When this happened Reed was in Abu Dhabi for the first Rolex Series event of 2023.

Pepperell was there too, and he wrote:

"It's so strange walking past a guy this week, playing in the same event as him, when this sort of s*** is going on. Utterly bizarre."

Reed is playing alongside Gavin Green and Scott Jamieson in the first two rounds this week, while McIlroy has been drawn with Tommy Fleetwood and Ryan Fox.