Patrick Reed reportedly threw a golf tee at Rory McIlroy in disgust after the Northern Irishman ignored him on the range at the Hero Dubai Desert Classic. 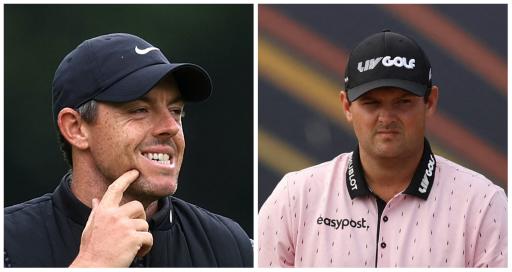 LIV Golf League player Patrick Reed reportedly lobbed a golf tee at Rory McIlroy in disgust when the Northern Irishman ignored him on the range before the Hero Dubai Desert Classic on the DP World Tour, according to reports.

According to the Irish Independent, there was visible tension between the two players on Tuesday.

Reed was reported as having stood near McIlroy for a few seconds with the intention of greeting him but the four-time major champion did not even acknowledge the American.

After this happened Reed is said to have "saluted" McIlroy before walking away with his hand in his pocket.

Reed was then described as throwing a tee in disgust in the direction of McIlroy, according to the report.

McIlroy's caddie Harry Diamond was also there and is said to have acknowledged Reed without incident.

The pair do have history. The duo were involved in an explosive singles match during the 2016 Ryder Cup.

Reed emerged with a narrow victory after the pair tore up Hazeltine, both holing monster putts and producing golf unlike anything we've ever seen in a scintillating encounter.

It is not the first time there has reportedly been a bit of tension on the range owing to LIV Golf.

When the DP World Tour announced sanctions for the LIV players who had teed it up in the inaugural event at Centurion Club, Sergio Garcia reportedly "flew off the handle" before the BMW International in Germany.

Bob MacIntyre was said to be the player that witnessed this alleged outburst. Garcia later denied it happened.

McIlroy took centre stage in 2022 as the PGA Tour grappled with their new rival that is financed by Saudi Arabia's Public Investment Fund.

Golf's "civil war" shows no signs of abating in 2023. Norman has recently been promoted and will be "given more power".

LIV have also announced their Donald Trump-heavy schedule for 2023 after finally striking a U.S. TV deal.

"I hate what it's doing to the game of golf. I hate it. I really do. Like it's going to be hard for me to stomach going to Wentworth in a couple of weeks' time and seeing 18 of them there. That just doesn't sit right with me."

McIlroy is making his first start of 2023 and was also spotted at Emirates GC testing out some Titleist Vokey wedges.