Rory McIlroy has given his version of events after LIV Golf player Patrick Reed lobbed a golf tee at the Northern Irishman at Emirates GC. 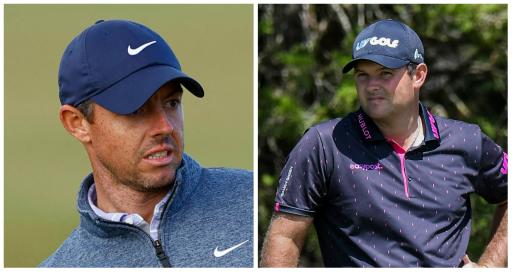 Rory McIlroy says "you can't pretend like nothing's happening" as he addressed his spat with LIV Golfer Patrick Reed.

McIlroy, 33, snubbed the American on the range at Emirates GC before the Hero Dubai Desert Classic on the DP World Tour.

And now the Northern Irishman has insisted that he "didn't feel the need" to acknowledge the former Masters champion.

McIlroy even went as far as saying that if the roles were reversed and he had thrown a tee he would be expecting a lawsuit.

It won't have escaped your attention that Reed is taking legal action against the PGA Tour and DP World Tour.

McIlroy told reporters that he received a subpoena from Reed's attorney Larry Klayman on Christmas Eve.

Speaking about his exchange with Reed, McIlroy told the media he didn't even see the tee being thrown.

McIlroy described the exchange as a "storm in a teacup" and he was surprised that it turned into a story.

"I was down by my bag and he came up to me, and I was busy working and sort of doing my practise, and I didn't really feel like -- I didn't feel the need to acknowledge him.
"So I didn't see a tee coming my direction at all, but apparently that's what happened. And if roles were reversed and I'd have of thrown that tee at him, I'd be expecting him a lawsuit."

McIlroy said he didn't duck and his back was turned to Reed.

McIlroy was asked if he could mend bridges with Reed and he didn't respond.

Tiger Woods has also been hit with subpoena requests by Reed's attorney. Woods has been accused of deliberately ducking requests.

"Yeah, I was subpoenaed by his lawyer on Christmas Eve. So of course, trying to have a nice time with my family and someone shows up on your doorstep and delivers that, you're not going to take that well.
"So again, I'm living in reality, I don't know where he's living. If I were in his shoes, I wouldn't expect a hello or a handshake."

McIlroy also confirmed there was "no way" he could make amends with another LIV player in Sergio Garcia.

McIlroy previously explained how he responded with a few daggers of his own.