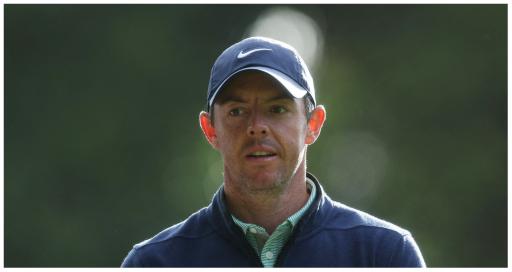 Rory McIlroy was spotted testing a set of Titleist Vokey wedges ahead of the Hero Dubai Desert Classic on the DP World Tour.

The Northern Irishman, 33, is making his first start of 2023 at Emirates GC where he is looking prevent Jon Rahm from taking the World No. 1 spot.

McIlroy played a practice round on Tuesday. He was filmed clipping away some shots on the range and warmly embracing Tommy Fleetwood.

Golf equipment nerds have pointed out the four-time major champion was testing out some Vokeys. There were even stamped with "RM".

McIlroy is an equipment staffer with TaylorMade. He plays a full set of irons, driver and ball with the OEM having signed with the company in 2017.

He was briefly an equipment free agent in 2017 and used Vokeys during this time period after Nike stopped making golf equipment.

Interesting development in Dubai where Rory McIlroy was spotted with at least one Vokey wedge in the bag. Looks to be a 58K lob with "RM" stamped on the back. pic.twitter.com/RjOOFF2FwK

NEW: Rory appears to have a set of Titleist Vokey wedges in the bag to start 2023. Unconfirmed thus far, but worth noting. pic.twitter.com/tOaQpG8Spm

McIlroy penned a multi-year extension with TaylorMade in 2022 and spoke of his excitement of working with the company "for many years to come".

We'll have to keep our eyes peeled to see if McIlroy will continue using Vokeys when he tees it up on Thursday.

McIlroy will be playing the first two round of the Hero Dubai Desert Classic alongside Ryan Fox and the aforementioned Fleetwood.

TaylorMade announce the signings of Grant Horvat and Micah Morris

We could watch that swing all day long.

Horvat and Morris rose to prominence on the platform after joining Good Good.

They both left the channel in somewhat controversial circumstances at the end of last year.

Micah Morris brings it all to the table. Now, he's bringing it to #TeamTaylorMade.

Welcome to the family, Tig! pic.twitter.com/hh7jrB6YWZ

Henderson won the first LPGA Tour event of 2023. She finished five strokes clear of Korda at the Tournament of Champions in Florida.