This DP World Tour pro wasn't too happy with this hole at the ISPS Handa Championship in Spain. 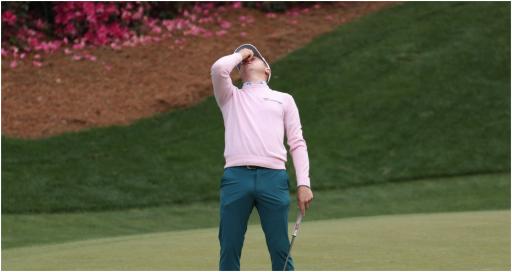 Golf pros are interesting souls and sometimes they like to have a right moan about course designs and set-ups. And one DP World Tour pro doesn't seem too happy with one hole at the ISPS Handa Championship.

Cast your mind back to the Abu Dhabi HSBC Championship at Yas Links on the DP World Tour earlier in the season and there was one hole that rubbed everyone the wrong way.

In particular, Tyrrell Hatton was particularly aghast with the sight of the 18th hole. He absolutely raged at the par-5, 646-yard beast.

“One of the worst par 5s I’ve seen all my life,” he lamented afterwards after signing for a catastrophic quadruple bogey on his final round.

The hole had got under his skin the whole week.

“If you hit a good drive as a pro you should have at least a chance to go for the green in two, otherwise the hole becomes a par-3, and that’s if you play it well.

“Hardly anyone will get there in two with the wind even slightly against you.

“As for me, I hit my tee shot straight down the middle into that ridiculous bunker, and thought my best route of there was to steer my second over to the 10th fairway, although that still left me nearly 220 yards to the pin for my third.”

Second toughest hole 1st round with 4.32 and “par4” with less birdies on the field (7)
@RichardMcEvoy79 what were u using for the second shot? thoughts?

3 wood second shot in the rain Pedro. Can never understand why they just don’t play the course as it’s designed still 560 yards off back tee.

This time, it’s the frustratingly long second hole at the Lakes Course at the INFINITUM resort in Tarragona at the ISPS Handa Championship in Spain that has got pros a bit angry.

Spaniard Pedro Oriol, who is not playing this week, questioned why the hole is a par-4. It’s 560 yards off the back tees so it takes two decent and accurate strikes to get there.

Oriol tagged in England’s Richard McEvoy, who is in the field, and asked him what club he used for his second shot.

It was a 3-wood, McEvoy confirmed, before writing: “Can never understand why they just don’t play the course as it’s designed.”