Padraig Harrington REACTS to hairstyle choice in TV clip from 1992

Padraig Harrington saw a clip of himself from 1992 and saw the amusing side of it, telling his social media following that his hairstyle was interesting... 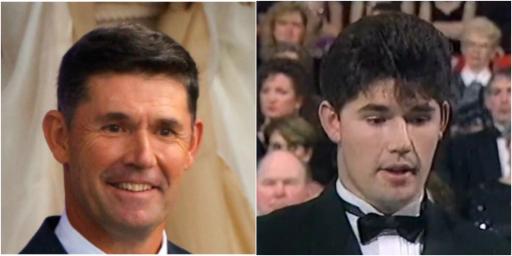 Padraig Harrington saw the amusing side of a TV clip which surfaced on Twitter more than 30 years ago with an interesting barnet.

The Irishman, who captained the European side at the most recent Ryder Cup in Whistling Straits, was forthright in his assessment.

"Would you look at the head on me," he posts to his social media platform, with more than 180,000 followers.

It does seem hard to believe that Harrington, now 50 years old, has been involved in the game for so long.

Well it was nearly 30 years ago but would you look at the head on me. https://t.co/gUdbZ89mXO

Oh, and he also picked up three majors along the way.

Harrington also picked up the PGA Championship in 2008.

The short game specialist has admitted that he would happily swap one of his majors for the Masters that has always alluded him.

Harrington came close to winning the green jacket in 2002 and 2008.

A new Ryder Cup captain has not yet been announced.

Henrik Stenson is the favourite to take over while Lee Westwood has distanced himself from the role.

Harrington's side came up against a blistering United States side and collapsed to one of the heaviest Ryder Cup defeats in the modern era.