Greg Norman has labelled Rory McIlroy a hypocrite over the topic of the LIV Golf as he urged the Northern Irishman not to begrudge other players' choices. 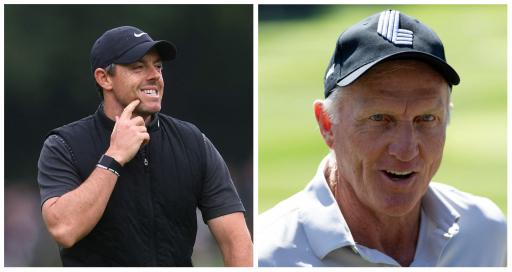 Greg Norman has urged prominent LIV Golf Tour critic Rory McIlroy not to "begrudge" other players joining the controversial series as he labelled the Northern Irishman a hypocrite in his latest verbal attack.

McIlroy famously aimed a not-so-subtle dig towards the LIV Golf Invitational Series chief executive when he claimed his 21st PGA Tour victory at the RBC Canadian Open in June.

After shooting a final day 62 to fend off Tony Finau and Justin Thomas - who got himself involved in another gimme controversy at the 2022 Presidents Cup - McIlroy said that overtaking Norman's record of 20 PGA Tour victories was added motivation.

Related: 9 players who changed their mind about LIV Golf Tour

"One more than someone else," McIlroy sniped in a comment that was clearly aimed at the polarising figure of 67-year-old Norman.

Norman, if you weren't aware, is currently trying to tie down a much-needed TV deal for LIV. Rumour has it that they are close to achieving such a thing.

Elsewhere, he recently visited Capitol Hill to plead his case for LIV Golf in front of lawmakers. He was then accused of "pimping" billions of dollars in Saudi Arabian money.

"They [LIV] wanted to talk about antitrust, and I could care less,' Congressman Tim Burchett (Republican-Tennessee) told the Washington Post. "It's not Congress's job. We're a country of laws; take it up to the courts. That's where it needs to be, not in the halls of Congress.

"How in the hell are we wasting any time talking about a bunch of millionaires and a golf game? This is all just Saudi propaganda."

But back to the topic at hand and Norman recently went on Talk TV show "Piers Morgan Uncensored" to discuss McIlroy and LIV.

Asked directly what his message to McIlroy would be, Norman said: "Well, my message is, Rory, you're an independent contractor,

"You have the right to make your decision. Remember, Rory started on the European tour. Then Rory decided to leave the European tour to go play where all the money is, where I went to play, to the PGA Tour."

He added: "Don't begrudge the other players for making a decision, that is a rightful decision under their independent contractual rights, to go and do it. It's just a shame that people have taken this stance, when you look back over a period of time, they've pretty much done the same thing themselves.

"The hypocrisy coming out of this is so deafening it's ridiculous.

"The PGA Tour has title sponsors that have a great relationship, a working relationship, for a commercial opportunity with the Saudi Government, with PIF [Saudi Public Investment Fund]."