Rory McIlroy on the dynamic of playing with LIV Golf pro: "It was FINE!"

Rory McIlroy has spoken of the "dynamic" of playing with a LIV Golf player during the DP World Tour Championship in Dubai. 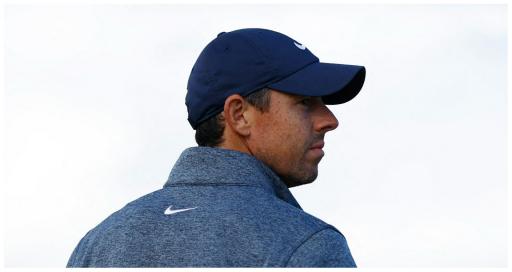 Rory McIlroy admitted the "dynamic was absolutely fine" after playing his second round of the DP World Tour Championship with Adrián Otaegui, who has had a large presence in LIV Golf's inaugural season.

McIlroy carded a second round of 68 that was highlighted by a stunning finish of birdie-birdie-eagle on the Earth Course at Jumeirah Golf Estates.

The Northern Irishman's task to try and win the tournament may still be too big at this point as when McIlroy signed for his 4-under par second round the leaders still had nine holes to play.

But nonetheless he was happy. He told the media:

"The first 33 holes were quite average to say the least.
"Yeah, it was nice to finish with a flourish and at least have some positivity going into the weekend. I obviously got myself a little closer to the leaders.
"The leaders still have nines holes to play. So I don't know where I'm going to be going into the weekend, but it's not as far away as it seemed to be about an hour ago. So that's a good thing."

In case you have been living under a rock, McIlroy has been quite outspoken throughout 2022 after the emergence of LIV Golf.

Critics have accused him of changing his tune weekly. McIlroy maintains he's just trying to be as honest as he can be.

He was honest before this tournament began when he suggested that LIV Golf's commissioner, Greg Norman, should "exit stage left".

McIlroy said only an "adult in the room" can help with peace talks between the warring PGA Tour and the breakaway series.

Although this PGA Tour legend completely disagrees with McIlroy's sentiments.

McIlroy was paired with Otaegui for his second round. The Spaniard has won $1,294,500 on the course with LIV in their debut season.

Was there going to be any animosity?

As soon as McIlroy tapped in for his closing eagle at No. 18, he embraced the Spaniard warmly.

Asked about this, McIlroy told the media:

"Yeah, it was fine. Look, I've known Adrian a long time. He probably put in one of the most impressive performances this year; going 19-under par around Valderrama is an unbelievable achievement.
"Look, it is what it is. He's a great player. He deserve to be here because he's made it into the top 50 and he's played well. The dynamic was absolutely fine."

All smiles for Rory McIlroy after he cards a second round of 4-under 68 at the DP World Tour Championship.

McIlroy closed with an eagle at No. 18

Who do you think will win this week? pic.twitter.com/Llv97Y8aXN

At the time of writing McIlroy is projected to finish top of the DP World Tour Rankings.

Despite falling short in the majors once again, if he were to hold off Ryan Fox for the honour it would bookend a remarkably consistent 2022.

McIlroy won the FedEx Cup, scooping the $18m bonus after raining on Scottie Scheffler's parade when he won the Tour Championship at East Lake.