"I like to feel loved," says Sergio Garcia, who is set to quit the DP World Tour and end his Ryder Cup career. 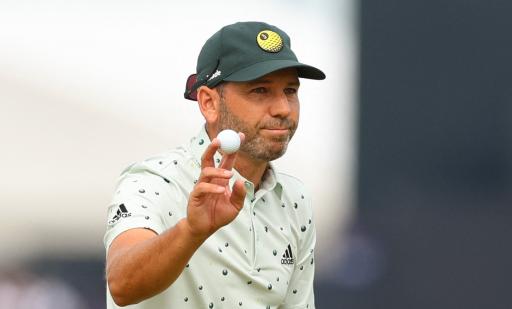 Sergio Garcia has told the media he is going to resign from the DP World Tour, which would mean he would be ineligible for the Ryder Cup.

Garcia has already resigned his PGA Tour card after having committed to the controversial Saudi-funded LIV Golf Invitational Series.

Speaking to reporters after finishing tied 68th at the 150th Open Championship at St Andrews, Garcia made it clear he does not want to compete on the DP World Tour any more, formerly the European Tour where he has played for the duration of his professional golf career.

Garcia also believes the DP World Tour will now become the "fifth best" in the world.

"I am quite clear about what I am going to do with the European circuit. Probably leave it," said Garcia after closing with a 73.

"Honestly, I want to play where they love me. I like to feel loved and sincerely in the European Tour. I don’t feel loved now.

"I have what I have and I am very happy with it and I want to enjoy it to the fullest. I’ll play less, I’ll be home more. If I don’t play big, then I don’t play them, but honestly I don’t care much either.

"I feel sorry for the Ryder Cup, but because of how I’m playing I wouldn’t be for Ryder either. My resignation is not official, but I’m going to make it effective.

"There are comments that do not make you feel good. I have given more than half of my life to the European Tour and feel that because you make a personal and professional decision and look once for you they treat you like that, it’s not worth it.

Garcia, 42, also fired shots at former European Ryder Cup captain Thomas Bjorn after his final round at The Open.

"When Thomas Bjørn – former captain of the Ryder – came to the BMW Championship and told us that here: ‘We don’t love any of you and all players say it'," said Garcia.

"I already have an age and had had enough suffering to be enduring nonsense like that."

I have never spoken to Sergio about LIV..

Bjorn has since tweeted that he has "never spoken to Sergio about LIV Golf."

When asked if Garcia enjoyed his week at the 150th Open Championship, he replied: "Not very much. I enjoyed the crowd, but that was about it."

Garcia is the highest points scorer in the history of the Ryder Cup.

Now that he is reigning from the DP World Tour, that means he will no longer be eligible to play in the biennial contest against the United States, or even captain the side one day.

Earlier this season, Garcia ranted that he could not wait to leave the PGA Tour.

Garcia currently finds himself 68th in the world rankings.

With LIV Golf events not currently counting for OWGR points, that position is likely going to get even worse and put Garcia out of the mix where major championships are concerned.

As a former Masters champion, that is the only one he will be eligible to compete in.

Next Page: Rory McIlroy on failing to win The Open - "It's one I feel like I let slip away"