Thorbjørn Olesen will take a three-shot lead into the final round at The Belfry as the tournament host faded. 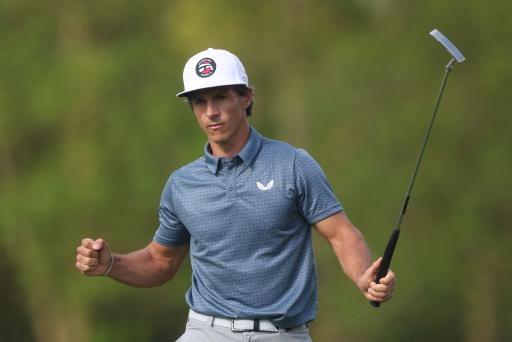 Denmark's Thorbjørn Olesen will take a three-shot lead heading into the final round of the British Masters at The Belfry.

Olesen is looking to move on from off-course issues that risked ending his career earlier in the summer.

But over his three rounds here he has looked in superb form an carded a third round of 3-under par 69 with a superb eagle-birdie finish.

It sees him atop the leaderboard at 11-under par after previously signing for rounds of a bogey-free 66 and a 2-under par 70.

Olesen is just ahead of Germany's Hurly Long (73) and Marcus "The Bullet" Armitage (70) who is leading the English charge.

The tournament host, Danny Willett (74), slipped seven shots off the pace as he was unable to back up his stunning 65 on Friday.

Willett, a former Masters Champion, had an ugly double-bogey six at the 18th after finding the water with his second shot.

Olesen is seeking his first win on the DP World Tour since the Italian Open in 2018.

Earlier in the summer he was cleared by a jury of sexual assault a woman on an aircraft and is now looking to put his foot down on a career that once looked like he could reach the very top.

Highlights of the Thunder Bear's round included holing out from 120 yards on the par-4 fifth hole and sinking a 23-foot birdie putt.

Germany's Long led the field after 36 holes and recovered late on to post a 1-over par 73 after dropping shots at the second, fifth, 11th and 12th holes before making three late birdies.

Scotland's Richie Ramsay is also in the mix. Denmark's Rasmus Hojgaard is also not out of it though will need to go low on Sunday.

The defending champion, Richard Bland, and Lee Westwood, who have both declared they have requested releases to play in the Saudi-backed rebel league, missed the halfway cut.