Alan Shipnuck has revealed the final clues of his biography with Phil Mickelson which is set for release on May 17 ahead of the PGA Championship. 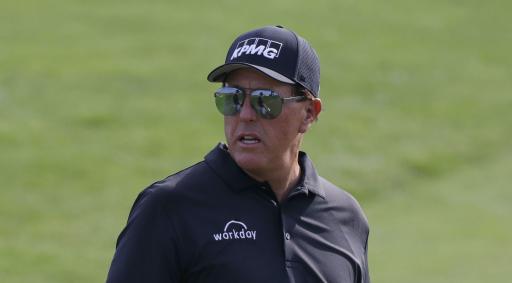 Phil Mickelson's biographer Alan Shipnuck has revealed the final sneak peek of his book on the six-time major champion called "Phil: The Rip-Roaring (and Unauthorised!) Biography of Golf’s Most Colourful Superstar."

Written on the Fire Pit Collective website, Shipnuck informs us that details of Mickelson's gambling issues between 2010-2014 are discussed.

Shipnuck, who caused controversy when he revealed Lefty's on-the-record/off-the-record comments on the Saudis, talks of a tale involving golf writer John Hawkins who supposedly once saw Mickelson place 50 bets in just over 20 minutes.

"The massive scale of Mickelson’s gambling losses has never before been made public, but, as noted in the book, during the Billy Walters insider trading investigation, government auditors conducted a forensic examination of Phil’s finances," writes Shipnuck.

"According to a source with direct access to the documents, Mickelson had gambling losses totalling more than $40 million in the four-year period (2010–14) that was scrutinized. In those prime earning years, his income was estimated to be just north of $40 million a year.

This is the second (and last) excerpt from the book. I wanted to try to capture the totality of Phil…and “Phil.” He is a complicated person. This has been a complex process. I can’t wait for 5/17, when y’all can read the whole thing. https://t.co/L0lNSQsnpX

"- In other words, it’s quite possible he was barely breaking even, or maybe even in the red. And Mickelson’s income dropped considerably during his winless years from 2014 to ’17."

Shipnuck also reveals that money was "a big factor" in his split with long-time caddie Jim 'Bones' Mackay in 2017.

"Bones had fired Phil at the ’17 Memorial, over a series of simmering grievances (laid out in detail in the book), including hundreds of thousands of dollars in overdue back pay," Shipnuck adds in his preview piece.

The author tells us that his book is far from a takedown of the reigning USPGA Champion. He says he still roots for Phil even if he "besmirched" his professional reputation.

In February, Shipnuck published Mickelson's description of the Saudis as "scary mother****ers." He also revealed his collusion with them to make the LIV Golf Invitational Series gain leverage over the PGA Tour.

Mickelson is now in exile from the PGA Tour. He hasn't played since January and it is unclear when he will return. Could he turn up to Southern Hills to defend his PGA Championship title?

As well as gambling issues, Shipnuck also shares the warm side of Mickelson and talks about the help he gave to Ryan Palmer when Palmer's wife was diagnosed with cancer.

The 51-year-old's wife Amy had been diagnosed in 2009 and after giving Palmer a hug at the 2016 PGA Championship, he referred his fellow American to a doctor who would take care of his wife.

May 17 is the date everyone has in their diaries for the biography's release and you sense there is plenty more to be revealed.

Next Page: Justin Rose on Greg Norman's tour: I am not ready to just play golf for money"