Harry Higgs emerged as a huge Rory McIlroy fanboy on Wednesday when he wished his fellow PGA Tour star a happy birthday. 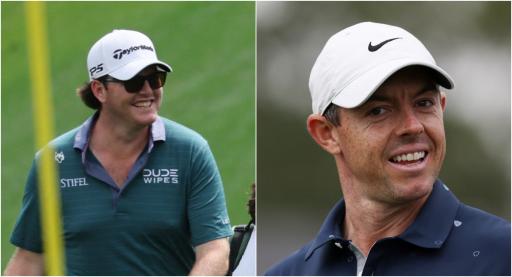 Rory McIlroy turned 33 years old on Wednesday, May 4. A fact that is hard to believe of a player who still plays with the exuberance and bounce of an 18-year-old.

We can assume he spent the day with his wife Erica and his daughter Poppy, but a highlight of his day was surely the message he received from fellow PGA Tour favourite Harry Higgs.

Higgs is one of the biggest personalities and most outgoing players on the tour. His attitude to golf and his relaxed demeanour is infectious and he has become very popular as a result.

The 30-year-old is a huge McIlroy fan like the rest of us and he wished the four-time major champion a happy birthday in the only way he knows how.

Just wanted to take a second and wish @McIlroyRory a Happy Birthday! Rory, you are cool as s**t and I hope you have a great day. I also hope I finish first this week and you finish second

"Just wanted to take a second and wish @McIlroyRory  a Happy Birthday! Rory, you are cool as s**t and I hope you have a great day. I also hope I finish first this week and you finish second," Higgs tweeted.

This could be wishful thinking. The Northern Irishman has a fantastic record at the Wells Fargo Championship, which is being played at TPC Potomac this week.

McIlroy is the only player in PGA Tour history to win the tournament on multiple occasions. He is looking for his fourth career win at this popular tour stop.

As for Higgs, he is not enjoying great form in 2022. He has missed half the cuts he has started in this season and his only top-10 came at the CJ Cup in October.

He has won on the Korn Ferry Tour and the PGA Tour Latinoamerica, so he will be hoping his birthday wish to McIlroy comes true in Maryland.