Jason Day had a round to forget at the Wells Fargo Championship as Rory McIlroy moved into the top-10. 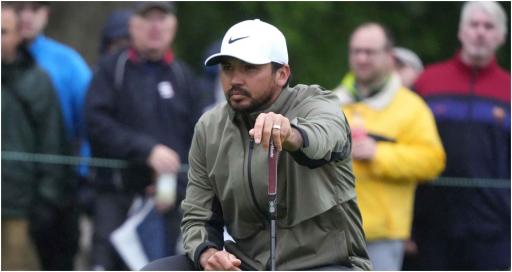 Jason Day endured a catastrophic third round as he gave away his 36-hole, three-shot lead at a rainy Wells Fargo Championship on the PGA Tour.

Day, a former World No.1 who last won in 2018, found himself at 8-over par through 11 holes at TPC Potomac after a dismal run which saw him go bogey-triple bogey-bogey.

The Australian, 34, started his day with two easy pars but then his troubles began at the par-3 fourth hole when he found the trap with his tee shot to drop his first of seven shots on the front nine.

He tugged his tee shot down the left side of the par-4 fourth hole to find the water on his way to a painful triple bogey before dropping more shots at the fifth and ninth holes.

After turning in 41, Day made another double bogey at the 10th. He rebounded at the 12th hole with a birdie before he sent his second shot at the par-4 15th into the thick stuff over the back of the green to make another bogey.

By the time Day finished his round it was a 9-over 79. At seven back, he needs the leaders to come back to him if he is to have any chance yet this was a bitter pill to swallow.

The surprise leader after 54 holes was Keegan Bradley who had reached 8-under par with a solid 67. The 2011 PGA Championship winner is in search of his fifth PGA Tour title.

Matthew Fitzpatrick, Matthew Wolff, Brian Harman and Rory McIlroy round out the top-10 going into the final round. McIlroy (68) jumped up from T-50 at the start of the day to T-6.

The Northern Irishman, 33, said: “I guess [I am] more just happy to be playing golf over the weekend. I think when you see conditions like this, you have to have a pretty upbeat attitude towards it and for me it was just grateful to be here.

“I didn't play great yesterday, but I was able to just hang in there and make that par on 18. Yeah, the attitude was just happy to be here, just tried to make the most of the next couple of days.”

Such was the difficulty of the conditions, Fitzpatrick said he had one approach: “[I was trying to] just get around, just literally just any way possible.

“You're not really looking to make birdies, you're not chasing. It's probably why I feel like I play better in these conditions, because I'm not maybe as aggressive and I'm just trying to get around really and not trying to chase a score or anything.

“Yeah, that's the mentality I had today.”

Leader Bradley said: “I know what's at stake. A lot of good things can come with a good round tomorrow.”