PGA Tour pro Adam Schenk made a joke about his wife's outfit but ended up getting trolled in return. 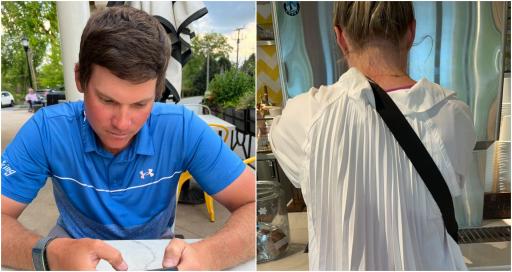 Adam Schenk may not be the type of name you are familiar with on the PGA Tour.

In fact, you could possibly argue that only the die-hard golf fan will know who he is.

He's only ever been as high as number 142 in the OWGR and currently occupies the World No. 201 spot.

His best finish on the PGA Tour this season saw him claim a top-10 at the Corales Puntacana Championship in the Dominican Republic.

Elsewhere, it's probably fair to say that it's been a bit of a struggle for the 30-year-old from Indiana as he's missed 10 cuts.

With that in mind, he needs to rely on the support on his family, friends and his wife Kourtney.

Schenk, who has won once on the Korn Ferry Tour in 2017, decided to make a joke about his wife's outfit the other day:

When your wife steals the hotel curtains pic.twitter.com/HTBgfXZckN

Well, that's a pretty bold move for a husband to make. A joke about the choice of his wife's clothing? Putting it on the Internet? Okay...

Kourtney then fired back:

When you post one remotely funny tweet and you gotta keep refreshing to see if you get any likes. pic.twitter.com/7ZuV6PwB55

And then Schenk provided one final update:

She just hit me with the “Do you ever wanna have sex again?” https://t.co/uSfJ5rsSjN