Charles Barkley on Tiger Woods: "Everyone in his world is uptight & s***"

Charles Barkley outlines the key differences between hanging out with Tiger Woods and Phil Mickelson. 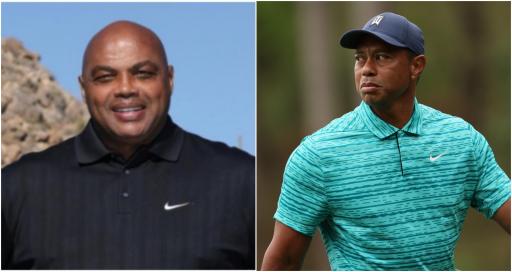 Charles Barkley has revealed that Tiger Woods is "no fun to be around" on the golf course and "everyone in his world is uptight and s***" but with Phil Mickelson you're always guaranteed to have a good time.

Alan Shipnuck, the author of the forthcoming biography about Lefty who published the controversial (and on-record, he claims) comments that led to his exile from the golf world has dropped another bombshell this week.

Shipnuck claims that between the period of 2010-2014 Mickelson had racked up gambling debts of some $40million.

The author writes that Barkley is one of only a few people who mixes with both Woods and Mickelson.

He quoted Barkley, who said of the duo:

"One of the reasons Phil has lasted so long is because he’s had a joyful life. Tiger won a bunch of tournaments, but there wasn’t much joy in it. Sure, Tiger is a better golfer. You're just in awe of his talent. But it's not fun to be around him. Everyone in his world is uptight and shit, afraid to say or do the wrong thing. Tiger himself has always acted like he's under siege. Gimme a f—– break. You're just a golfer, dude. When you're with Phil, you're guaranteed to have fun. He makes people feel good. Everyone around him is always smiling. That's a huge difference, man."

Barkley joined Mickelson in the commentary booth for the most recent edition of The Match which saw Brooks Koepka defeat Bryson DeChambeau at The Wynn Golf Club in Las Vegas.

The former NBA great also teamed up with Lefty where they played Steph Curry and Peyton Manning.

Mickelson has previously claimed that Barkley - affectionately known as Chuck - is "one of the funniest people I know".

The oldest man to win a major is reportedly close to making a decision about returning to the golf world.

He has filed entries for the forthcoming PGA Championship and U.S. Open and has also requested a release from the PGA Tour to play in the first LIV Golf Invitational Series event at Centurion Club in England next month.