Nicolai Højgaard won his second title on the DP World Tour with a sensational victory at the Ras al Khaimah Championship. 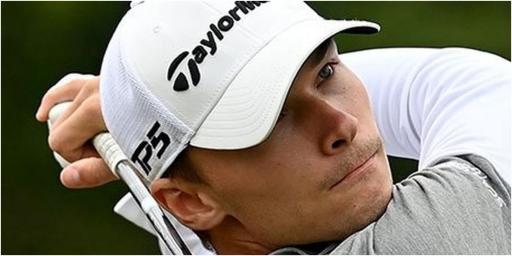 Nicolai Højgaard won his second DP World Tour title in a thrilling final round at the Ras al Khaimah Championship.

The young Dane, 20, whose twin brother Rasmus has also tasted victory, was made to work extremely hard for his win over England's Jordan Smith.

Højgaard went on a blistering run late on in his third round at Al Hamra Golf Course to move three shots clear going into the final round.

He had made a sensational eagle at the fourth on the final day which saw him take a five shot in the middle of his round.

But Jordan Smith's charge of eight birdies on his way to a 6-under 66 meant the Dane fell behind by two shots, leaving victory in the balance.

Højgaard made a double bogey at the ninth hole and also dropped another shot at the 12th to set up a thrilling battle down the stretch.

He recovered with a birdie at the 13th and then eagled the 14th and in the end he cruised to victory. Surely a future major winner?

He won his maiden title at the Italian Open last year a week after his brother won the European Masters in Switzerland.

A highlight of his round came at the sixth hole when he scrambled for par playing a sublime flop shot when he had little green to work with.

He even finished the tournament off with a birdie at the last. It is his second DP World Tour victory in his 54th appearance.

Rasmus Højgaard hit the headlines earlier in the week when he produced one of the luckiest shots we have ever seen.

These twins are lucky. And they are good.

"Unbelievable shot. That is the best shot he's hit this week."

Nicolai Højgaard with an incredible par save at the sixth.#RakGolfChamps pic.twitter.com/bXMgwpyx46