Adam Scott had not one, but two strokes of misfortune as he began his week at the Slync.io Dubai Desert Classic on the DP World Tour. 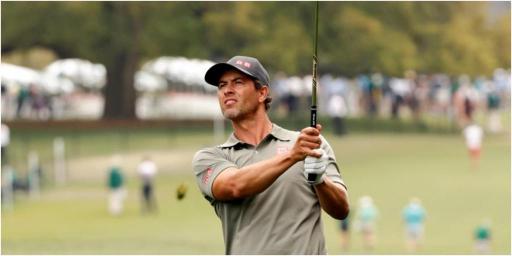 Unlucky Adam Scott hit the pin twice in his opening two holes at the Slync.io Dubai Desert Classic on the DP World Tour.

Play has begun at the Emirates Golf Club and it was Sergio Garcia who held the early lead, being chased by Collin Morikawa.

Australian Scott typically putts with the flag stick in these days but we're wondering if he might just take out the pin from now on.

On his first hole of the day Scott sent his approach shot into the second cut of rough and had a tricky downhill chip.

The first one was a delicate and it was rightly pointed out it was unlucky not to go in on the par-4 first hole.

At the next hole the Australian was faced with a 46-yard approach and sent it high up into the air from the thick stuff.

This time he was more fortunate the flag stick acted as a barrier. Better luck next time.

"Got lucky on both occasions," one person wrote. Perhaps a bit harsh.

Scott, now 48 years old, was this week's author in the popular player's blog on the official DP World Tour website.

It appears he now has a different sense of perspective after a tough few years in golf.

"I probably set my expectations a little wrong at the start of last year, but when you’re competitive it's very hard to lower them. I expect to play at a very high level and if I don't I'm not really even going to have a job. You can make a lot of excuses, but I don’t think excuses will get you very far on a competitive Tour like this, so you just have to figure out a way to deal with whatever situation you find yourself in. And after being out here for 20 years I know that things don't always go your way, especially in golf, because it's a difficult game. So although I've been frustrated when I haven't played as well as I want to, I have never let it take me to the breaking point."