Rory McIlroy on Harry Maguire: "He seems like a great leader" 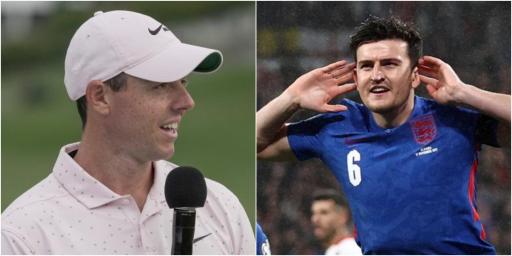 Rory McIlroy wasn't on hand to give us an opinion about Harry Maguire's golf swing but claimed he thinks the Man Utd captain is a "great leader".

Golf fans were yesterday reacting to the swings of Premier League players such as Maguire, Jordan Pickford, Alex Oxlade-Chamberlain and Andrew Robertson.

WATCH: IS HARRY MAGUIRE'S GOLF SWING BETTER THAN HIS DEFENDING FOR MANCHESTER UNITED?

There were some interesting swings in the Pro-Am ahead of the Slync.io Dubai Desert Classic, the second Rolex Series event in as many weeks.

Maguire's stance was very open, Pickford hit a nice little buttery fade off the 18th at Emirates Golf Club, Robertson hit a solid draw and the Ox ripped it (although it went a little left).

McIlroy, 32, is reportedly a massive Manchester United fan. The Northern Irishman admitted he saw Maguire, the 28-year-old Red Devils captain on the range but didn't get a chance to see him hit any.

"I saw him on the range this morning. I was rushing to the first tee because I was late so I didn't get a chance to see him hit any. It's great to have those lads out here.

"Seems like a great leader. Seems like a great motivator, the sort of personality that you would want to captain a football team and someone you look up to. He's actually a lot bigger than I realised standing besides him. Like standing next to him, he's a big lad. I wouldn't want to get tackled by him, that's for sure."

McIlroy also got the opportunity to see Formula One driver Lando Norris in action in Dubai.

Norris, judging by his social media, has been working hard on his game when he's not racing.

He appears to have struck up a bit of a bromance with Ian Poulter, who was pictured having a look at his swing and giving him some advice.

McIlroy was asked if he would trade places with anyone in the sporting world.

"I don't know, I think about that quite a lot and I think about where I want to trade places with anyone in the sporting world. I think the thing that I value so much about being a golfer is you're your own boss, you turn up wherever you want to, basically and you make your own decisions. The responsibility is solely on you, which I think is a nice thing."