WATCH: Pro, plugged in a bunker on an upslope, executes horror shot perfectly

This scenario was described as "the stuff of nightmares" for DP World Tour pro Alexander Björk. 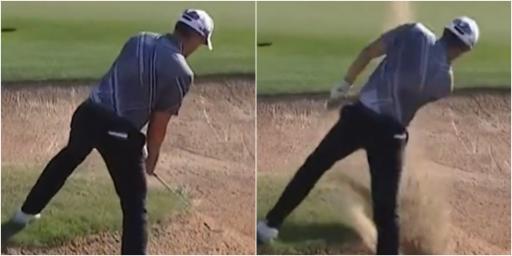 Hands up if you think you could get this ball on the first attempt?

Well, I probably could get the ball out eventually. But it would take me more than a few hopeless swipes first.

The scene? Al Hamra Golf Club during the second round of the The Ras Al Khaimah Classic on the DP World Tour.

The player? Alexander Björk, the 31-year-old Swedish pro, was faced with the nightmare scenario here.

Just look at this. It makes you feel just a little bit sick. "This is an absolute horror story," narrates Tim Barter, the on-course analyst.

Plugged. In the face of the bunker. Feet miles above the ball. Absolutely no green to work with.

Good luck with that.

"I didn't think he could get that out the bunker."

Björk's only option here was to play it left of the pin and try and keep it on the green. Getting it out on the first attempt would be a plus.

"Corr, that was some shot from there," Barter adds. "I didn't think he could get that out".

It certainly did look like it took a huge effort for the Swede to get that out. Just listen to the impact.

It did lead to a bogey. But it could have been so much worse.

Björk was nine strokes off the pace through three rounds after shooting 67. 69, 70. His only DP World Tour victory came in 2018.

That was at the Volvo China Open.