Alex Noren was in the middle of his pre-shot routine when this person took a tumble during the final round of the Alfred Dunhill Links Championship. 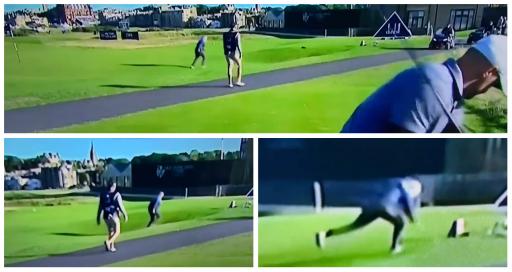 Blink and you might have missed this. But golf fans are pointing out the hilarity of this moment when Sweden's Alex Noren was firmly in the midst of his pre-shot routine during the final round of the Alfred Dunhill Links Championship on the DP World Tour.

The moment in question features Noren practising his familiar "low and left" move which enables him to absolutely flush it, hitting his reliable fade everywhere and anywhere. He is on the 17th tee at St. Andrews and it was a crucial moment in the tournament at the Old Course.

Leader Ryan Fox - who has been in superb form all season - has had trouble getting over the line. Winning is hard. Noren was likely all too aware that he could pile on the pressure by getting one away straight down the middle of the fairway at the Home of Golf after making himself a factor down the stretch.

Related: Piers Morgan will never, ever, stop doing this at the Old Course

Then, it happens. We're not too sure who this person is or what they are doing. In all likelihood they just desperately wanted to get out of the way to let Noren hit or maybe they've had a few too many glasses of fizz.

Still, it's absolutely hilarious. A hat tip to Amanda Rose - co-host of Paige Spiranac's podcast - who captured the moment.

No idea how the Euro Tour got this video of me pic.twitter.com/Evc6sag4R1

Noren ultimately came up one stroke shy as Fox, despite making bogey at the Road Hole, held on for victory despite having to deal with the factor of a charging Rory McIlroy.

There was a few other hilarious moments over the course of the week.

Thomas Pieters also took to social media - during his round - because he was so unhappy with the playing conditions.