Ryan Fox earned his third DP World Tour win with a stunning performance on Sunday at the Home of Golf as Rory McIlroy came up short at St. Andrews again. 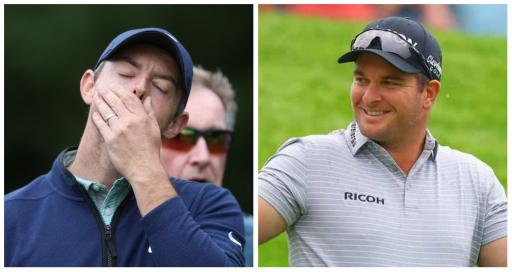 Ryan Fox bounced back from the disappointment of being overlooked for the International Presidents Cup side to claim the Alfred Dunhill Links Championship on the DP World Tour as Rory McIlroy endured more pain at the Old Course despite going low.

McIlroy opened his week in Scotland, at Carnoustie, with a 4-under 68. He could only laugh as players faced the misery of the biblical wind and rain on the second day, carding a 3-over 75 at Kingsbarns.

The Northern Irishman, 33, was as many as eight strokes adrift of the leader, England's Richard Mansell, heading into the final round at the Home of Golf after a Saturday 66. Mansell struggled to get anything going and made a double bogey at No. 2 before fading with consecutive bogeys on the back nine. His time will surely come.

McIlroy said he was targeting at least 8-under on Sunday to force then leader Mansell to shoot in the red numbers as he was looking for his first win. McIlroy came close, shooting another 66 to post the clubhouse lead.

This was the first time he had returned to St. Andrews since enduring heartbreak at the 150th Open Championship where Cameron Smith, now a LIV Golf Tour signee, pipped the 21-time PGA Tour winner and the young rookie, Cameron Young, to the Claret Jug.

McIlroy had to remain patient as he struggled to get anything going in the early stages of his round on Sunday. He made four consecutive pars before picking up shots at No. 5 and 6. He turned in 3-under 33 and then got to work on the back nine.

He produced a mammoth drive - similar to the one that bamboozled caddies earlier in the week - and reached the green at No. 12. His golf ball landed perfectly and he gave himself an eagle opportunity from 12 feet at the 348-yard par-4 but had to settle for birdie.

By this point he had already made birdie at 10. He picked up another shot at 13 but at this time it was already appearing too late as Fox moved into the lead. McIlroy's race was run when he dropped a shot at 17.

"Played well again today," McIlroy told the media. "I didn't make birdie at 14, which sort of halted the momentum I had. It was a bit of a struggle on the way in. [I] came up two or three short of my target in the end."

As for Fox, this was the 35-year-old New Zealander's third win on the DP World Tour. He won earlier in the season, at Ras al Khaimah.

Since then, he's had finishes that include a T-9 at the Catalunya Championship, T-8 at the British Masters, second at the Dutch Open, third at the BMW International Open and another close call at the Irish Open where he was the runner-up again.

That spell saw him qualify for three majors.

He endured a nervy finish as he made bogey at the famous Road Hole, hitting his tee shot way, way left and then failing to get up-and-down.

But par at the 72nd hole was enough for a one stroke victory over England's Callum Shinkwin and Sweden's Alex Noren.

Uihlein, who has played in LIV Golf events, remains one of three players who is a plaintiff in the antitrust lawsuit against the PGA Tour alongside Bryson DeChambeau and Matt Jones.

Next page: Piers Morgan will never, ever, stop doing this at St. Andrews