LIV Golf's Bryson DeChambeau on rumours his deal is $125m? "A little low"

Bryson DeChambeau has confirmed the length of his LIV Golf deal and joked about how much his contract is worth. 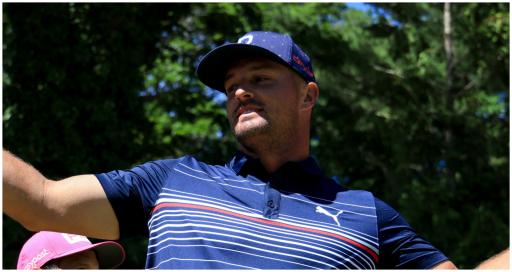 Bryson DeChambeau has confirmed reports are “somewhat close” his LIV Golf contract is allegedly worth $125million.

The 28-year-old was announced as a LIV Golf signee during the Saudi-backed series’ opening event at Centurion Club just outside of London a few weeks ago.

Last week the 2020 U.S. Open winner spoke to the Country Club Adjacent podcast where he also confirmed he was set to stay with the Greg Norman-led series until at least 2026, having signed a four-and-a-half-year contract.

When it was put to him that the contract was worth $125million, he reportedly cracked a smile and joked that it was “a little low”.

He then told the podcast: “I'm not gonna say the details, I mean for what's reported it's somewhat close.

“It's a four-and-a-half-year deal, I can definitely tell you that and a lot of it was up front which is great.

“What's cool about it though is that I've already put it in places that make sense, whether it's my foundation or real estate, being able to build a multi-sport complex or taking care of my family, taking care of what we've got going on with our content creation with Regecy, numerous other things too.”

Phil Mickelson’s LIV Golf deal is thought to be worth $200million. Lefty spoke about this at his press conference at the first LIV Golf event at Centurion Club. He hoped that would remain private.

DeChambeau had his content creation team inside the ropes throughout his Portland debut last week, where he finished 10th and earned $560,000.

The American also welcomed Paul Casey onto his team “Crushers GC”. The Englishman’s signing on fee has not been confirmed but it has been reported to be north of $50million.

Unlike some golfers, DeChambeau has not resigned his PGA Tour membership, citing that it would be “an honour” for him to be allowed to participate in tournaments that he previously won such as the Arnold Palmer Invitational and Jack Nicklaus’s Memorial.

Whether he is permitted to play those remains to be seen. He is currently suspended by the PGA Tour for signing up with LIV Golf.

When it was put to DeChambeau that he might not be able to play on the PGA Tour again, he admitted that he would have “a new legacy”.