Oliver Fisher played in the first LIV Golf event at Centurion Club but he wasn't fined by the DP World Tour. 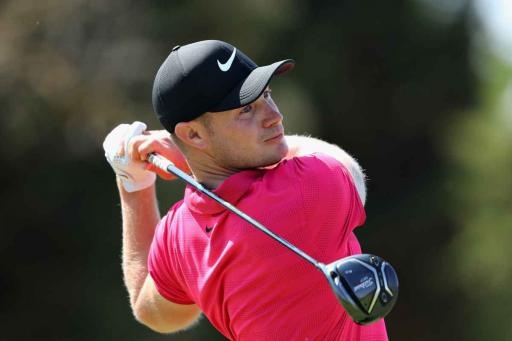 Whilst some of Ryder Cup Europe’s ageing icons were fined £100,000 by the DP World Tour and suspended from three tournaments, one player who did play in the inaugural LIV Golf event was not fined.

That would be 33-year-old English pro Oliver Fisher, who boasts one victory on the European Tour at the 2011 Czech Open.

Fisher is in the field playing the Horizon Irish Open this week at Mount Juliet. It is the same tournament that DP World Tour chief executive took shots at a certain player for not playing.

The Englishman was also in the field for the first event of the LIV Golf Invitational series at Centurion Club just outside of London a few weeks ago that was won by Charl Schwartzel.

But unlike Ian Poulter, Sergio Garcia, Lee Westwood, Graeme McDowell and Martin Kaymer, Fisher wasn’t given the hefty fine of £100,000.

Fisher told GolfChannel that to get his release to the LIV tournament if he wasn’t in a DP World Tour event by a certain date then he could get a release.

He did not qualify for the Volvo Car Scandinavian mixed that conflicted with the first LIV tournament, so he was eligible to play.

Pelley shot back in his own statement, saying that he believed the sanctions were considered fair, proportionate and necessary.

Also playing in the Irish Open who played in the first LIV Golf event are Oliver Bekker and Pablo Larrazabal. They were fined. LIV Golf have reportedly paid the fines.

Those fines are reportedly set to double for every LIV Golf players like Westwood participate in without waivers, though this is yet to be substantiated.

Westwood has posted a cryptic message about “what comes next”.

Fisher told GolfChannel he has no plans to play another LIV event but hasn’t ruled out the possibility.

“If I got in any more I’d love to play. The whole situation at the moment, the PGA Tour, [DP World Tour], LIV Golf, at some point they need to start talking,” he told the publication.

“I had a great week at Centurion. It was great to play there. If I got the opportunity to play some more, I’d love to play more. I’ve played the European tour for 16 years, it is what it is.”

According to a report by GolfDigest, DP World Tour player Wilco Nienaber was listed as a first alternate to the second LIV Golf event, being held in Portland.

Next page: Padraig Harrington says LIV Golf players "have made their bed"