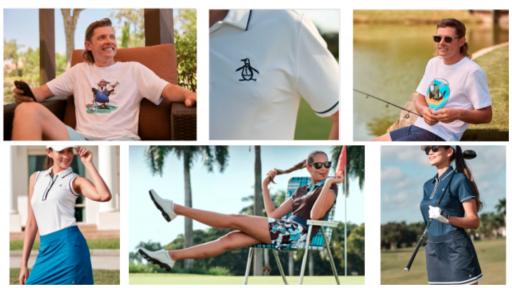 Smith, who took a huge pay packet to join the Saudi-backed operation after winning the 150th Open Championship last summer, has been posing for photography in recent weeks ahead of getting his season started on the LIV Golf League.

The new range of Original Penguin Golf by Munsingwear clothing is available for both men and women, and it showcases dynamic prints, classic styling and technically advanced fabrics.

As you can see from some of Smith's snaps, the new Original Penguin Spring range features heritage polos with an enlarged Pete emblem, Seersucker printed shorts and graphic tees inspired by Munsingwear archive illustrations.

"The Spring 2023 collections reinforce our commitment to authenticity and heritage while embarcing our passion for the good times," said Oscar Feldenkreis, CEO of Perry Ellis International.

Lupe Benitez, Senior VP of Design, said: "We dug deep into the Munsingwear archives of the 70s and 80s and recreated several of the original prints and patterns while incorporating modern fabrications."

The latest women’s collection by Original Penguin is inspired by psychedelic and carefree style of the 60s and 70s.

Smith will get his 2023 campaign underway at LIV Golf Mayakoba in Mexico from February 24 to 26.

While the full LIV Golf schedule has yet to be revealed with just four weeks until the new season starts, the 14 tournaments were leaked in the press.

By the time Smith does compete in Mexico next month, he could very well find him outside the top 10 in the world as a result of LIV Golf remaining shut out of receiving crucial world ranking points.

Smith was shuffled back to fourth in the world last night after Jon Rahm etched his name on silverware for a fourth time in his last six starts.

Next Page: Sergio Garcia among trio of players to withdraw names from court hearing