We put the new TaylorMade SIM driver up against the TaylorMade R7 SuperQuad to see how much modern technology has effected performance. 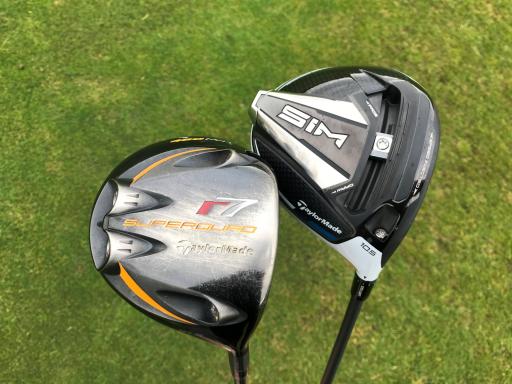 Driver technology has changed dramatically over the the past decade and we've seen some pretty incredible stuff over the past few years, with TaylorMade being one of the leading brands in innovative technology. But has modern technology really effected driver performance?

We decided to put the new TaylorMade SIM driver, launched just a few weeks ago, up against the TaylorMade R7 SuperQuad driver, first released back in 2007.

With 13 years between the two drivers, it's safe to say that there are some huge differences in technology, with Speed Injected Twist face being pretty unimaginable back in 2007.

The main technology behind the R7 SuperQuad is the four moveable weights, which back in 2007, was something very new to the golf market and it became one of the most popular drivers of the decade.

Fast forward to 2020 and the new TaylorMade SIM driver is built with a carbon crown, features the brand's most aerodynamic shape ever, a sliding weight system and of course, Speed Injected Twist Face, putting every single driver at the very limit of legal speed.

From a design point of view, the R7 SuperQuad was very similar in shape to most drivers back then, a smaller and more rounded head, whereas the SIM driver is noticeably more aerodynamic.

The sound of both drivers is also extremely different and something that has developed over the last 13 years. The R7 SuperQuad produces a loud and more 'tinny' sound compared to the powerful thump that you hear from the SIM.

To get our results, we used a SkyTrak monitor and TaylorMade TP5 balls, hitting ten shots with each driver and eliminated any mishits.

Below you can see the results that we found when comparing the two drivers.

When the R7 SuperQuad came out in 2007, it was one of the most impressive drivers anyone had seen for a long time and the above statistics would have been very satisfying 13 years ago.

But it's clear to see that modern technology has made a huge difference in driver performance, with the SIM providing an extra 17 yards of total distance.

Club speed was also up by two miles per hour with the SIM driver, due to the aerodynamic shape and the new rotated Inertia Generator, which also helps to increase distance.

The R7 SuperQuad is still available to buy on multiple websites, but clearly the technology of 2020 has seriously improved driver performance, so if you take your distance seriously then you might want to consider upgrading if you're still using a driver over 10 years old.

The question is, how far will driver technology go? Are brands already planning their drivers for the next 10 years and if so, how will the technology chance?