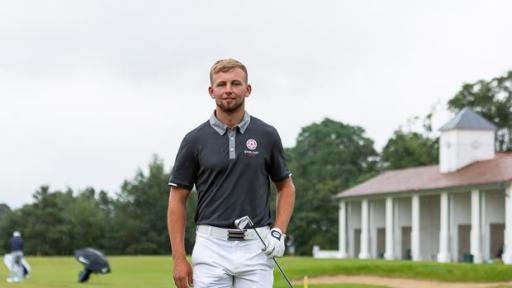 European Tour hopeful Gian-Marco Petrozzi fell foul of yet another one of golf's crazy rules yesterday and it even denied him a place of making Q-School Final Stage.

Petrozzi was docked two strokes on his final hole - under Rule 13-2 - after he walked through a bunker to pace out his yardage, before then raking his footprints in the sand.

Despite making a hole-in-one and five birdies on his closing six holes for a round of 65 and 6-under total, the resulting two-stroke penalty brought him back to 4-under and proved costly as it denied him the chance of a playoff for an alternate spot.

Here's what the Englishman had to say on Twitter following the incident...

A player must not improve or allow to be improved, his line of play or a reasonable extension of that line beyond the hole by:

> pressing a club on the ground

> moving, bending or breaking anything growing or fixed (including immovable obstructions and objects defining out of bounds)

> creating or eliminating irregularities of surface

> removing or pressing down sand, loose soil, replaced divots or other cut turf placed in position, or removing dew, frost or water.

‘The “line of play” is the direction that the player wishes his ball to take after a stroke, plus a reasonable distance on either side of the intended direction. The line of play extends vertically upwards from the ground, but does not extend beyond the hole.’

Thankfully, a number of golf's rules are being modernised for 2019. Check them out here.