DP World Tour Championship R2: Rory McIlroy trails by one after DOUBLE at 18

The Northern Irishman continued his scintillating form until disaster struck at the last. 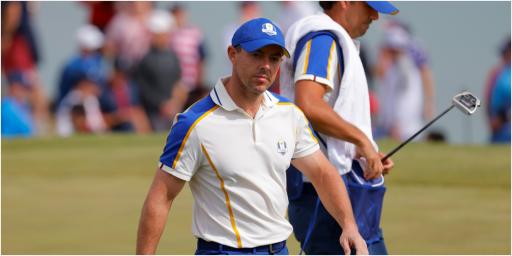 Rory McIlroy is only one stroke behind the lead at the DP World Tour Championship after 36 holes on the European Tour.

The Northern Irishman, 32, admitted after his quality opening round yesterday that he felt like he had finally gotten his game back.

His comments suggested a new-found sense of belief, who has returned to work full-time with his childhood coach Michael Bannon.

At the European Tour's final event under this moniker, McIlroy had a more testing day in his second round.

7th birdie of the day for @hr59sam

He opened his tournament with a sublime 65 on the Earth Course at Jumeirah Golf Estates and then signed for a second round 70.

His 2-under round was not without its moments. A double bogey at the par-5 18th will no doubt frustrate McIlroy.

McIlroy had made the turn at 3-under, but he dropped a shot at 10. He found two more birdies before disaster struck at 18.

"It's always an adventure when you watch Rory," the commentators remarked after McIlroy chipped in for birdie early in his round.

At the halfway mark, there is a three-way tie for the lead.

Race to Dubai points leader Collin Morikawa had a good day and forced his way into contention.

Open champion Morikawa has fired two 4-under rounds of 68 and sits inside the top-10.

Billy Horschel, who is second in the points race, is at level par for the tournament.

Sergio Garcia and recent European Tour winner Joachim B. Hansen are also going well at 7-under.

MORE: RORY SABBATINI DQ'D FOR HAVING A STICKER ON CLUB