Watch as Bryson sends a drive 521 yards towards a giant target of Brooks Koepka off the top of the Wynn casino. 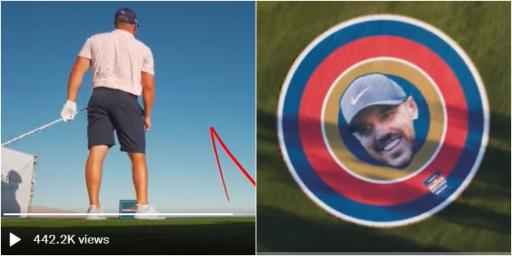 Bryson DeChambeau will soon peg it up versus Brooks Koepka in the fifth edition of The Match.

And it appears the two are prepared to do some pretty interesting things to promote it. This latest idea, from Bleacher Report, was pretty cool. It involved DeChambeau hitting some of his typical bombs off the roof at The Wynn casino in Las Vegas towards Koepka.

No, Koepka wasn't standing down below. They had manufactured a giant, smiling target of Koepka. DeChambeau heads to the 60th floor and admits the idea is insane. "I am ripping some bombs off of here," he says. "Why is he smiling?".

The yardage is 521 yards to the target. DeChambeau is standing at 650 ft, with a slope adjustment of 19 degrees and a gentle breeze. "That's f***ing gone", DeChambeau says as he rips the first one. "This is the real deal, I'm coming for you Brooks," he adds.

Now of course, DeChambea doesn't actually rip it that far. The height helps. But still, it's a pretty spectacular visual as he sends ball after ball towards the target which is constructed at the Wynn Golf Club, where they will play their match.

.@b_dechambeau was hitting bombs off the roof at a giant @BKoepka target #CapitalOnesTheMatch is Friday, Nov. 26, at 4pm ET on TNT pic.twitter.com/uaWZZTTCrQ

It certainly is a more interesting idea for marketing The Match. It begs the question, what more will we see ahead of their showdown the day after Thanksgiving in Las Vegas. We've already had DeChambeau hitting a meme of Koepka down the range.

Koepka has responded in kind to his frenemy. Just this week he posted an amusing Tweet of a virtual Koekpa living inside DeChambeau's head. It was in response to a comment this year earlier in the season where DeChambeau denied being affected by Koepka's behaviour.

NFL great Tom Brady appeared to watch the video, and then suggested an awesome idea for The Match:

Can we incorporate a hole next Friday where you guys start at opposite ends and actually hit golf balls at each other? @BKoepka @b_dechambeau https://t.co/5DAqpH4fNw

NEXT PAGE: NELLY KORDA HAS A NEW COACH