Golf fans react as Marcus Armitage GOES NUTS in the shops at the US Open!

Marcus Armitage had an amazing week at the US Open and it wasn't only the tournament that he enjoyed being a part of... 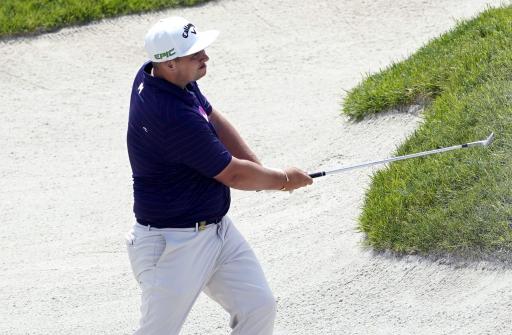 Marcus Armitage has had a fantastic time of late on the European Tour, having picked up his first-ever victory at the Porsche European Open in June.

His win at the Green Eagle Golf Courses in Germany earned him a place at the US Open at Torrey Pines, which brought great excitement to the man from Salford.

Armitage captured the hearts of so many golf fans around the world when he gave an emotional interview after his win, remembering his mum who sadly passed away when he was a young boy.

There is no question that Armitage is making her proud as he competed at the US Open, which was won by Spaniard and new World No. 1 player Jon Rahm.

Unfortunately, it wasn't to be for Armitage as he shot rounds of 71 and 76 in San Diego to miss the cut. However, he has since revealed this week at the Irish Open that he spent some time in the US Open shops to update his wardrobe.

Everyone loves to buy some merchandise at a tournament to make some great memories, and it was certainly a week that Armitage will not forget any time soon.

Golf fans reacted to Armitage's admission on his time in the shops:

"Still probably spend 5k in there," another fan said.

"Normal bloke doing what he loves," another fan commented.

NEXT PAGE: BRYSON DECHAMBEAU MAKES SLOW START TO ROCKET MORTGAGE CLASSIC WITH A 72