Jeff Winther put in a nerveless performance to hold off Sebastian Soderberg to win the Mallorca Golf Open. 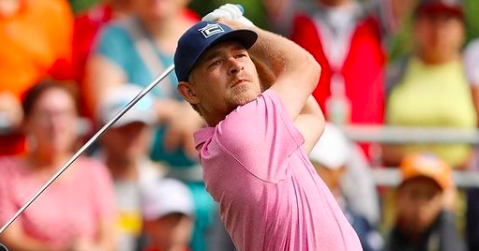 Jeff Winther held his nerve to win the Mallorca Golf Open and to finally pick up his first European Tour victory.

It was an extremely competitive final round at Golf Santa Ponsa where the Dane Winther began with a two-shot lead over Jorge Campillo.

Winther suffered a scare on the par-3 3rd hole. He hit his tee shot under a tree to the left of the green and he was forced to play his second shot lefthanded.

He miraculously chipped his ball to roughly 20 feet and he rolled in his putt for a much-needed par. Meanwhile, Sebastian Soderberg birdied three of his opening seven holes to join the leader on 15-under-par.

Winther, 33, made his first birdie of the day at the 10th hole, but Soderberg also replied with another birdie on the 11th hole. Both players were on 16-under-par.

A world class par save from the leader #MallorcaGolfOpen pic.twitter.com/R57JZZBRMv

Soderberg, the winner of the 2019 Omega European Masters, made crucial mistakes at the 13th and 15th holes to fall back to 14-under-par.

The Swede incredibly made par having found the water on the par-4 16th hole. He remained in touch with Winther with two holes remaining.

However, the Dane played consistently and despite making his only bogey of the day at the 72nd hole, Winther secured the one-shot victory on 15-under-par.

The World No. 309 also finished one stroke ahead of home favourites Campillo and Pep Angles, and four shots ahead of Laurie Canter and Sebastian Garcia Rodriguez.

It was another solid week for Canter, who is still in search of his first win on the European Tour. Andrew "Beef" Johnston finished in tied seventh place on 10-under-par.