Bryson DeChambeau: How his long drive debut will CHANGE the stuffy golf world

DeChambeau may be a show off but his passion for long drive is earnest, which is why we need to fully embrace him. 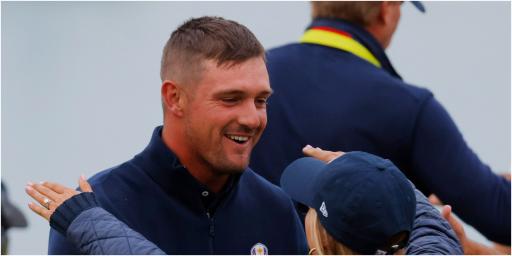 And so it is over but boy oh boy it was fun while it lasted.

Bryson DeChambeau's attempts to become a long drive champion ended with a bang and not with a whimper.

A sixth place finish, thousands of fans watching live on YouTube and a throng of supporters going absolutely bananas behind him.

Drives of more than 400 yards and ballspeeds reaching 219mph. Let's go baby, DeChambeau roared. Are you not entertained?! Bellowed the commentator.

When DeChambeau caught hold of his drives last week, yelling after them, the crowd didn't sound dissimilar to that infamous, rawkous wrestling crowd reacting to the return of their hero Dwayne 'The Rock' Johnson.

DeChambeau wasn't a returning hero but a new one emerging in long drive.

And it was amazing to watch.

If you have never tuned into the Pro Long Driver's Association World Championship before you may have been surprised at one thing.

You would be forgiven for thinking that only months ago the sport wasn't in crisis.

They were dropped by the Golf Channel at the beginning of the pandemic. The tournament was originally called the World Long Drive Championships. It looked like it was all but over. The death knell. Sponsors left and the league didn't look like it had a future. But a core group of players brought it back to life. It was renamed and budgets were trimmed down.

And then there was Bryson DeChambeau. Around this time he emerged from his off-season time looking absolutely enormous. He had put on a large amount of weight - reportedly 40lbs - in his pursuit of becoming the longest player on Tour. Nick Faldo couldn't shut up about protein shakes. There were rumours of just how many calories DeChambeau was consuming.

Also during this time DeChambeau was pumping out videos on his own YouTube channel that has now become enormously popular and an interesting insight into a behind-the-scenes look at his life and workouts.

He appeared to be good pals with Kyle Berkshire, now the two time world champion after retaining his title. They shared videos of their training together. DeChambeau almost passed out as he was drenched in head to toe in sweat.

There were two-a-day training sessions in the build to the Ryder Cup. DeChambeau was pilloried for not taking his preparation seriously. Steve Stricker deflected questions. Then the United States smashed Europe, DeChambeau hugged Brooks Koepka and flew off in his pursuit of the long drive world championships. What was the problem?

This is the new age of golf and DeChambeau shouldn't be criticised for having goals and working exceptionally hard trying to achieve them. If the game is to survive, thrive and grow then we need to embrace unique individuals like Bryson.

Sure, he likes to show off. But his passion for golf and long drive is very, very real. Berkshire told Golf.com: "He’s got a lot of attention on him even in this sport. But he’s not someone who necessarily always enjoys that. In fact, I don’t think anybody does." It was impossible for the attention not to all be about Bryson this week.

But he did try and distance himself from it, trying to highlight his superhuman competitors. When DeChambeau hopped in the commentary booth, he talked about how long drive has made his game better. More often than not he talked of other people. He described Berkshire as having the flexibility of an elastic band. He really knows his stuff and will be around long drive for a long time.

Whether or not you love DeChambeau or hate him one thing is true in my mind: the world of golf is better for him.

Looks can be deceiving.@B_DeChambeau gives the fans what they want ... with a 3-wood. pic.twitter.com/bwzgcHeA6D

RELATED: JUSTIN THOMAS IS AUCTIONING OFF HIS RYDER CUP GEAR