Jon Rahm: "This is my official, my one and only time I'll talk about this"

Jon Rahm discussed Charley Hoffman's apology, his legacy on the PGA Tour and what he makes of rival league developments. 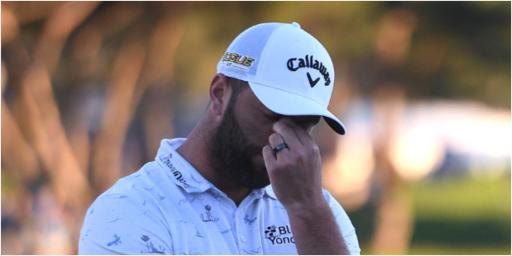 Jon Rahm didn't realise he was having a press conference this week, yet he decided to make one thing clear at the Genesis Invitational.

It's the only time he will talk about it, the world number two told reporters at Riviera. And no, it's not his infamous "putting contest" remarks.

In fact, it was his allegiance to the PGA Tour. Or, in his words, "pledging his fealty". An interesting phrase from the 27-year-old.

Rahm enters the week as one of the favourites to win. It's off the back of a frustrating week with the flat stick at TPC Scottsdale.

When asked where his loyalty is, Rahm said:

"All right. Well, I mean since I wasn't aware I was not going to have a press conference this week, that's why I take this time to say that this is my official, my one and only time I'll talk about this where I am officially declaring, let's say, my fealty to the PGA Tour.

"I'm a PAC member and I have a lot of belief in Jay Monahan and the product that they're going to give us in the future.

"There has been a lot of talk and speculation on the Saudi league. It's just not something I believe is the best for me and my future in golf, and I think the best legacy I can accomplish will be with the PGA Tour."

Legacy is a word that was used quite a lot by some of the elite players recently. Rory McIlroy warned the young PGA Tour players who are thinking of jumping ship about what a gamble this new venture could be.

Collin Morikawa, too, appears to have abandoned the money in search of catching some of Tiger's records.

"I've said it many times in press conferences before, I don't do this for the money, which to me is the only appeal to go over there. They throw numbers at you and that's supposed to impress people.

"I'm in this game for the love of golf and the love of the game and to become a champion, right? I grew up watching many great players play great events such as this one and there's history and legacy to those things. That's something that has a lot of appeal to me

"I made it very clear to my management team to don't even bother me with it until this was something that was maybe real and it never came back. The only things I ever heard were from players.

"I already made more money in my life than I ever thought I was going to make, so that's not the appealing part to me, right?

"Week in and week out over here you're playing against the best players in the world. I don't think the PGA Tour is a bad product and it's only going to get better."

Rahm explained that he believes every player is free to make their own choice, although he suggests at present the only appeal is monetary. There is more than money to play for on the PGA Tour, he said. "There's history, there's legacy", he said.

What did Rahm, a players advisory council member, think of the outburst?

"I do agree it was inappropriate but I believe Charley was more venting off than anything else," he said.

"What Charley needed to say was said yesterday in our first PAC meeting, right? He is somebody that has been involved in our Tour for a very long time and has done a lot of wonderful things for the PGA Tour and the members.

"You know, one mistake doesn't characterize a whole career. I think it was just a hiccup. I bet the commissioner and the PGA Tour already spoke to him about how to handle the situation and I'm sure Charley knows it.

"He did apologize to all of us yesterday, so as far as I'm concerned, it's now his and the PGA Tour's job to discuss any repercussion that may come from it. But I do believe it was more venting off than anything else."

Click here to find out how to watch the Genesis Invitational.