Should there be more team golf events on the PGA Tour?

The Zurich Classic of New Orleans began today and it is a rare tournament on the PGA Tour where the players compete in pairs. 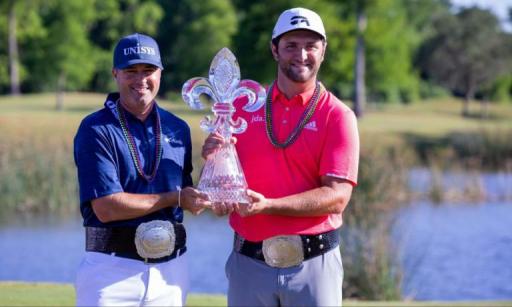 The Zurich Classic of New Orleans is a very unique week where it combines four-ball better-ball and foursomes in an exciting team event at TPC Lousiana.

The first and third rounds are played in the four-ball better-ball format, where the best score within the teams of two counts. Foursomes is played in the second and fourth rounds, which is a straight forward format of alternate shot.

I think these events are refreshing and provide a different vibe to the week as players are not only playing for themselves, but they are playing for their partner and this brings a degree of pressure.

A badge of honour for DeChambeau, but does PGA Tour rule change END all our fun?
Is this the MOST excited we've been about a Tiger Woods return for a long time?

The Zurich Classic of New Orleans was last won by Jon Rahm and Ryan Palmer in 2019, beating the European pair of Tommy Fleetwood and Sergio Garcia in second place.

The PGA Tour is a tough and gruelling process that brings extreme pressure, so I think the walk-on music and relaxed nature of the Zurich Classic is a great feature of the season.

The most famous and watched team event in golf is, without doubt, the Ryder Cup which I sit and watch intently every two years and cheer on Europe.

As much as I love the event and desperately want Europe to win, there have been elements of tribalism that have emerged in recent years which don't sit well with me and other people who I know.

There is something uneasy about fans cheering when players make mistakes or miss crucial putts and although it pleases me when it goes in Europe's favour, I can never bring myself to cheer on a golfer's misfortune.

It is here where the rivalry of football is mirrored into golf and I am all for rivalry as it can produce some incredible moments and shotmaking, but we've seen it spill over before.

Golf fans travel in their thousands to watch the Ryder Cup and they provide a fantastic atmosphere, but can also create a hostile one which isn't normal at regular golf events.

The Zurich Classic is an example of how team events on the PGA Tour should be played. The event carries a spirit and atmosphere which should always be experienced in golf.

I would encourage team events, just as long as they don't have the potential to spill over as the Ryder Cup has on a few occasions in recent years.

NEXT PAGE: TIGER WOODS' SIGNATURE WORTH AN INCREDIBLE $4,363 IN SPORTING MEMORABILIA LIST