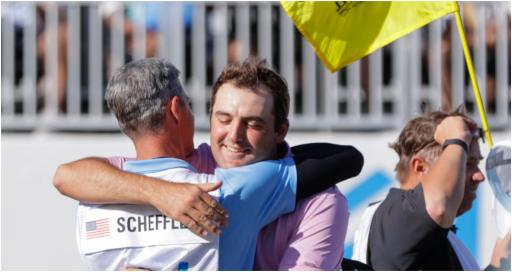 Cast your mind back to the RSM Classic on the PGA Tour and you might remember a bit of interesting golf news about new World No.1 Scottie Scheffler.

Related: Scott and Scheffler is a duo made in heaven

Scheffler, 25, had picked up Ted Scott in November on a trial period after the carrier had shocked the golf world by parting ways with two-time major champion Bubba Watson.

Scott and Watson were a memorable duo that fought like brothers on and off the golf course. Their partnership was entertaining.

Much like brothers bicker and have spats (they had more than a few), they loved each other. Which was why their split was so surprising.

Always one to wear his heart on his sleeve, Watson made a habit of bursting into tears with emotional victories and hugged his caddie like a bear, and a brother.

Scott previously responded with a quote from the movie Forrest Gump about what it was like to carry for the colourful Watson.

"You never know what you're gonna get," he said, adding that with Watson it was less of telling him what to do but more just trying to make him comfortable.

After a successful trial period between Scheffler and Scott, and they never looked back.

They got off to a delightful start. Scheffler shot an opening 63 at Sea Island then paid tribute to Scott afterwards.

"Teddy's a real positive influence. We were in a good mood all day. He did a good job helping me stay patient, not over think things out there," he told the media.

Scott was on Watson's bag for all 12 of his career PGA Tour titles and the two wins at Augusta National. Scott was formerly Paul Azinger's caddie.

But back to Scheffler, who at the time had five top-three finishes over two seasons on the PGA Tour.

"I really just think the world of him as a person, so for me that was—that's why I was attracted to him just being a potential good partner for me out on the course," Scheffler told the media.

"We'll just see how things go right now. Today was a lot of fun and go from there."

Go from there, they did, and more. Since then, Scheffler has broken free from the shackles of the moniker of being the best player yet to win.

Then at Bay Hill he won the Arnold Palmer Invitational to elevate his status even more.

He was the World No.5 heading into the WGC Match Play. He navigated a tricky group that included match play supremo Ian Poulter. He lost to Tommy Fleetwood but beat Matthew Fitzpatrick in a mammoth playoff to advance.

Then he beat Seamus Power and Dustin Johnson before eventually putting in a dominate performance against Kevin Kisner to dethrone Jon Rahm as the best player on the planet.

Scheffler did not face the media for a quick interview after he beat Johnson. He simply did not want to face the questions about what was on the line.

But he got there, and said his head was spinning.

There is absolutely no denying that Scott and Scheffler are a duo that is here to stay for the forseeable future.

Isn't there a tournament in Georgia soon?