Tiger Woods' 11-year-old son Charlie is 825/1 to win a major by the age of 25 and it has received mixed opinions from golf fans. 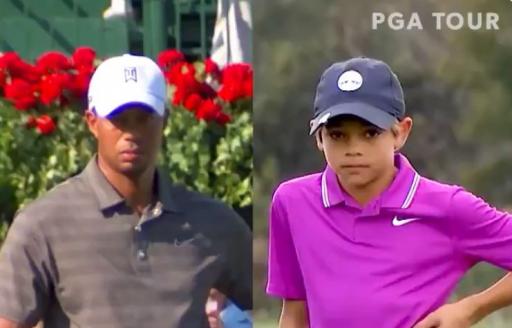 After starring in his first televised golf event alongside his father Tiger Woods, 11-year-old Charlie has become one of the most talked about golfers in the past few days and now you can even bet on him to win a major with certain bookies.

The news has divided opinion amongst golf fans, with many excited at the prospect of young Charlie growing up to play on the PGA Tour and attempt to wrack up as many majors as his father, while others believe no odds should be available on him until he turns professional, which may not even be in his plans.

"Sad that betting is more important than letting a child grow up not matter who his parents are," said one golf fan.

"Imagine placing this bet and in 10 years time watching him in the final group at The Masters. Awesome!"

"Relax people!! He’s just a kid who loves being with his dad! Golf may or may not be in his future."

"Oh I am all over this! Bit of a long time to wait but could be well worth it with odds like that."

"There are same age kids all over the world playing the same and probably better golf! They just don’t have the privilege of a well renowned father and the related media favouritism!"

Tiger and Charlie finished in 7th place at the PNC Championship, where we were treated to some magical moments between the two, including an incredible drawing shot with a 5-wood from Charlie, where he left his ball just a few feet from the hole before tapping it in for eagle.

NEXT PAGE: Video of Tiger Woods and son Charlie's mannerisms will blow your mind!