Boy, 6, with cystic fibrosis becomes a SUPERSTAR a year after taking up the game

His heroes are Tiger Woods and Rory McIlroy... 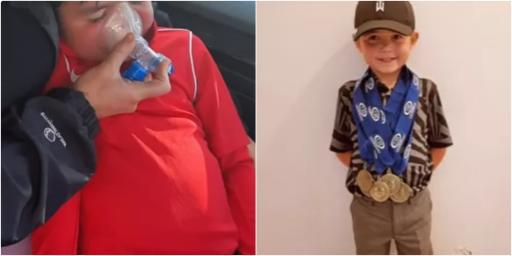 A six-year-old golfer with cystic fibrosis whose hero is Tiger Woods is trying to raise money so he can play in America.

Little Frazier Harris, from south Wales, is already better than most adults and has already won a number of junior tournaments.

His success so far in tournaments has resulted in a qualification to play in the Junior World Championship next year.

His parents built him a practice area when the pandemic took hold and he had to shield and could not leave the house for 12 weeks.

His mum, a hair stylist, and conference speaker dad had their businesses severely affected by the pandemic.

Fraizer, who told Wales Online that he takes 50 pills a day and does physio in the car before playing, is almost at his target goal.

You can check it out here.

Fraizer is also hoping to raise the funds so he can play a full schedule of events in 2022 which includes:

The money donated is towards his entry and expenses.

Along the way, he wants to raise awareness of cystic fibrosis.

Dad Jermaine told the publication: "I have always loved playing golf, and Frazier had a set of plastic clubs from a very young age.

"I noticed that he was spending a lot of time hitting golf balls, and because we went into an ultra lockdown I set up a putting green in the garden to get Frazier outside and have exercise.

"Then we watched a documentary on young golfer called The Short Game, and he liked it so much, he was out practicing every day because he wanted to be as good and the children featured in it.

"His heroes are Rory McIlroy and Tiger Woods and he really wants to be as good as them."