Bryson DeChambeau almost pulled off an epic upset at the Pro Long Drive World Championship in Nevada after the reigning champion was knocked out in ninth. 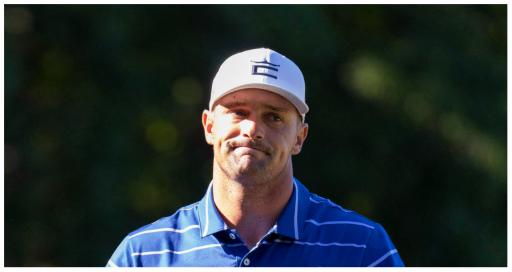 Bryson DeChambeau - who addressed his LIV Golf critics earlier in the week - almost pulled off an epic upset at the Long Drive World Championship.

Last year, DeChambeau made his debut in the event shortly after helping the U.S. defeat the Europeans 19-9 in the Ryder Cup at Whistling Straits doing simply insane things.

He made it through to the group of eight and although he was swinging the club very, very fast - it was clear that he did not possess the freakish swing speeds of the sport's elite. He finished seventh.

Bryson finishes 2nd place in the Pro Long Drive World Championship to Martin Borgmeier. Bryson hit his best ball of the event on his very last chance, when he needed it most, but ultimately fell short to the 426 yard drive from Martin.

However, on Saturday, 29-year-old DeChambeau - who was roasted by Justin Thomas and Shane Lowry this week over his gallery rope video - not only made it through the group of eight, he made it through to the final.

In the end, he came up only 21 yards short of defeating German Martin Borgmeier in Mesquite, Nevada.

DeChambeau's biggest drive was 406 yards in the final. In his six allotted drives, he found the grid three times.

He followed that with one that went 426 yards.

Pretty darn impressive stuff from the polarising figure of DeChambeau. There were 128 contestants who started the week.

Last year's champion, Kyle Berkshire, was knocked out in ninth. Berkshire, 25, had surgery on his hand three weeks ago.

DeChambeau also got past some big names in the sport in Justin James and Zack Holton.

His week could have finished prematurely as he qualified for the last 16 players with his last ball in the round of 32.

Borgmeier told the official broadcast of DeChambeau: "There is one very, very important thing, and all of you guys know

"I would not be here, none of us would be here with the improvements in technology, if one guy wouldn't have come in a year ago to make the sport what it is right now. And I think he's on a very good track to come back. And that guy is Bryson DeChambeau."

He added: "He also came in second! What is going on! That guy is a professional golfer and he's putting up these ball speed numbers … he lights it up in the final, hitting 400 plus! No one has ever done that before! People don't realize how crazy that is!"

Next page: DeChambeau thanks Tiger for LIV opportunity