Bryson DeChambeau faced his LIV Golf Tour critics this week and followed that with an impressive performance in the Pro Long Drive World Championship. 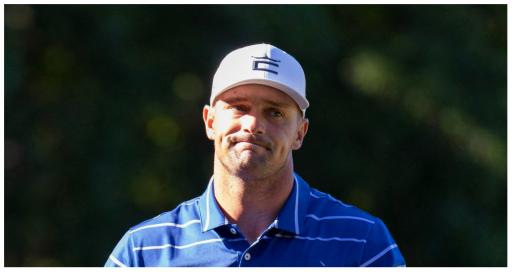 Bryson DeChambeau took time out of facing his nemesis and addressing his LIV Golf Invitational Series critics to compete in the Pro Long Drive Championship in Mesquite, Nevada, where he is now through to the final 64.

That is perhaps somewhat unsurprising news, given the 29-year-old American advanced to the final 16 of last year's event, which was won by Kyle Berkshire.

DeChambeau, you might remember, copped a little bit of heat because he was accused of risking injury with his long drive training sessions ahead of the Ryder Cup (where he memorably did this) at Whistling Straits last September.

There was no issue as DeChambeau went 2-0-1 to help the U.S. side thrash the Europeans 19-9. But he cut short his celebrations to hot foot to over to Las Vegas to compete.

The American later admitted that he suffered a torn labrum in his left hip as a result of his long drive training. He later faced more difficulties by fracturing the hamate bone in his left hand. "It's my own fault," he said.

It's probably fair to say that DeChambeau has received far more criticism over his move to the LIV Golf Tour than he did for risking an injury.

There are 122 entrants in this year's championship and DeChambeau has topped his qualifying group.

All six of his drives went further than 355 yards.

DeChambeau is now a part-owner of PLDR. He was knocked out in the final eight last year, finishing sixth in a field of 80 players.

DeChambeau is coming into this event off the back of LIV Golf Chicago, where he won $532,500 for finishing T-8.

He addressed his LIV Golf Tour critics earlier in the week by saying: "People can say whatever they want. I'm okay with that. I have no problem [if they're saying] bad stuff or whatever.

"I really care about the growth of the game of golf as much as people don't see that or don't agree with the way I do things or whatnot.

"I'm okay with it [the criticism]. Because hopefully at the end of the day when they look back and they go, 'Whoa, look what ... look how much effort he gave into helping juniors out [and] giving back to communities and whatnot."

He added: "So, there's a lot to be said for [people] being quick to judge. I always say - this is a good one - Tim Tebow [American football player] told me this the other day.