Bryson DeChambeau showed good humour in re-creating his famous LIV Golf Tour gaffe when he got tangled in a rope that led to a flood of memes. 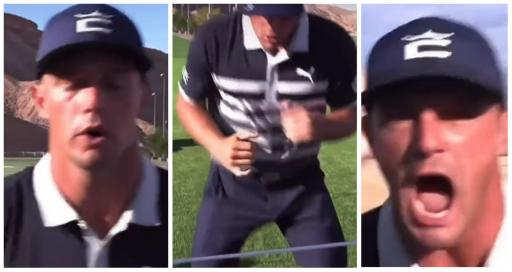 Full credit to Bryson DeChambeau with this one, who re-created his absolutely hilarious LIV Golf Tour moment after competing in the Professional Long Drivers Association (PLDR) world championship.

In case you have absolutely no idea what we are on about, DeChambeau got clotheslined by a gallery rope during the final round of LIV Golf Chicago.

Bryson just got DEMOLISHED by a rope. pic.twitter.com/x6e4b0ixah

Of course, it didn't take too long until the clip got the WWE treatment. Social media superstar Paige Spiranac also roasted the 29-year-old and even during the 2022 Presidents Cup it was pointed out that Davis Love III was navigating the ropes perfectly.

After DeChambeau competed in the group stages of the 2022 event, he decided to do this:

This is a bit of a ropey rematch pic.twitter.com/9AbG0K7JDG

Earlier in the broadcast, DeChambeau hopped in the commentary booth. He is now a part-owner of the PLDR and his love for trying to hit the ball farther and farther is well-documented.

Although his training led one serious injury that dogged his 2021-2022 season on the PGA Tour before he decided to join the LIV Golf Invitational Series.

Addressing some of the criticism he has faced, DeChambeau said: "People can say whatever they want. I'm okay with that. I have no problem [if they're saying] bad stuff or whatever.

He added: "I really care about the growth of the game of golf as much as people don't see that or don't agree with the way I do things or whatnot.

"I'm okay with it. Because hopefully at the end of the day when they look back and they go, 'Whoa, look what ... look how much effort he gave into helping juniors out [and] giving back to communities and whatnot."

He added: "So, there's a lot to be said for [people] being quick to judge. I always say - this is a good one - Tim Tebow [American football player] told me this the other day.

DeChambeau's comments come as Phil Mickelson and three other LIV Golf Tour players have withdrawn from the antitrust lawsuit against the PGA Tour.

At the time of writing, DeChambeau is one of three players who remain as plaintiffs in the suit, alongside Peter Uihlien and Matt Jones.

DeChambeau previously used this pizza analogy when discussing the PGA Tour's battle with their Saudi-backed rival.

He predicted that their would be a resolution to the saga ripping the professional golf world in two swiftly.

"I personally know that it will get figured out, whether it's legally or whether they come to the table and work out terms," DeChambeau told Tucker Carlson. "I definitely think it will wash itself out in the future, pretty shortly."