Jota opened the scoring for Celtic in their 3-2 win over Aberdeen on Wednesday night and he and former England goalkeeper Joe Hart celebrated in golfing style. 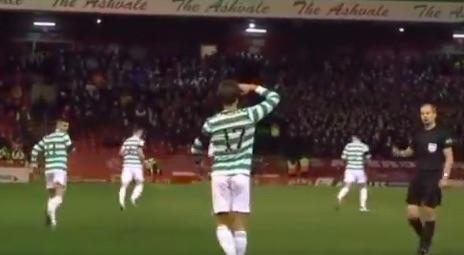 At different times in different European football leagues, we have seen footballers celebrate a goal by pretending to hit a golf shot.

An abundance of professional footballers play golf in their spare time and many of them have reached single figure handicaps. Wouldn't that be great?

Celtic became the latest team to perform a golf celebration and it came courtesy of a goal from Joao Pedro Neves Filipe, or Jota as he is commonly known.

On Wednesday night, Celtic went to Aberdeen and picked up an important 3-2 win to keep a narrow one-point lead over their fierce rivals Rangers in the Scottish Premier League.

RELATED: VIKTOR HOVLAND HAS A FRESH HAIRCUT & A NEW DRIVER AT TPC SCOTTSDALE

Who else missed Jota and Hart’s Celebration the other night? pic.twitter.com/I7D9m4oWpN

When Jota opened the scoring for the Hoops, his teammates congratulated him. But once they all jogged back to the halfway line, Jota took his chance to perform the special celebration.

He waved to Joe Hart, the current Celtic keeper, to prompt him and let him know he was ready. Jota then bent down and performed a golf swing.

They acted as though the ball got sent towards Hart and the former England and Manchester City keeper lunged to his right and imitated catching the golf ball.

It might not have been a classic rendition of the popular celebration but Jota and Hart were determined to do it. As for the referee, he wanted the Portuguese star to return to his own half so the game could restart.

Jota looked as though he had a half-decent swing, but perhaps his teammate Hart should do the hitting next time as he has previously taken part in feature golf videos during his time for England and in the Premier League.

NEXT PAGE: SAHITH THEEGALA: THE UNEARTHED CHARACTER OF THE PGA TOUR