Donald Trump claims he made a hole-in-one but can Ernie Els verify?! 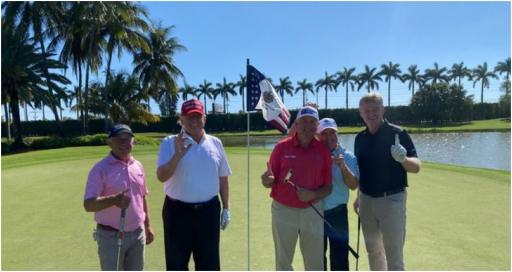 Donald Trump and the truth have an interesting relationship. But this latest claim is quite sensational.

When he's on the golf course, we've heard his scores are also somewhat dubious.

His latest claim to fame is that he got a hole-in-one. Trump says he made the ace at International Golf Club West Palm Beach.

The former president of the United States was having a round before making an appearance at a "Save America" rally later that evening.

Trump, who has also claimed he will be the 47th president after Joe Biden, was pictured alongside alongside Ernie Els in the photograph.

Tim Swain, who is a Republican running for Senate in South Carolina, posted the news to his Twitter feed. But can The Big Easy verify?

TRUMP JUST MADE A HOLE-IN-ONE! pic.twitter.com/89lrgsGkjT

Suuuure he did. You didn’t take the blindfolds off to see him tippy toe by you and drop the ball in?

Then he went on to score 38 under par; scoring 5 additional holes-in-one, beating Kim Jong-il to become the greatest golf player ever! pic.twitter.com/EvC4ZRn9pB

"Trump just made a hole-in-one!" Swain wrote in all caps.

Some Twitter users congratulated Trump, who is now 75 years old.

But others, they were not buying it. Not at all. "His fifth of the day!" one person chimed in.

Trump was constantly criticised during his time as president for spending too much time on the golf course. He denied that, of course.

Do you believe the claim? Where are you Ernie Els? Can you confirm this?