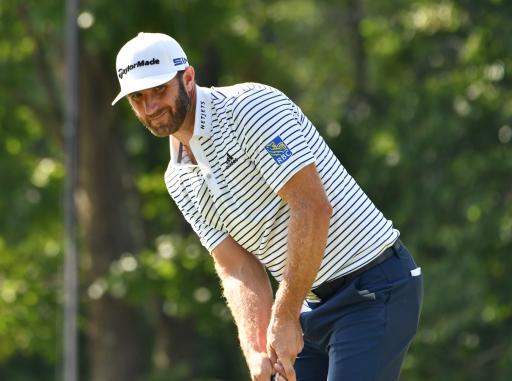 It will probably go down as the most frustrating round of 60 of all time for Dustin Johnson on day two at The Northern Trust at TPC Boston.

For seemingly the longest time on Friday afternoon, it appeared Johnson would go on to enter golf's elusive 59 club having played the first 11 holes in an incredible 11-under par.

He would go on to par the remaining seven holes, but had the consolation of moving two strokes clear atop the leaderboard on 15-under par heading into the weekend.

Johnson's 11-under 60 would mark his lowest ever round in his PGA Tour career, and his opening nine hole score of 27 is a new PGA Tour record for the lowest ever nine holes on the circuit.

Despite narrowly missing out on breaking 60, Johnson is staying typically upbeat.

"Any time you shoot a number like that, you're never going to be disappointed," said Johnson.

"I definitely feel like the game is in good form and need to come out tomorrow and do the same thing.

"Everything was going well today. I was striking it really well, just giving myself really good looks and obviously I was rolling the putter nicely.

"Any time you are that many under through 11 holes you are putting well. I made some nice putts, but also I hit some really good shots."

One man who did manage to join golf's magic 59 club on Friday was Scottie Scheffler, however, as the American birdied 12 holes en route to a 12-under par 59.

It’s all in The Takeaway. pic.twitter.com/WQCk3ux8Vw

Scheffler, who moves up to 13-under par alongside Cameron Davis in a tie for second, now joins 11 players to have shot sub-60 rounds of golf on the PGA Tour. Ten of those have been 59s, with Jim Furyk posting a record 58 in the final round of the 2016 Travelers Championship.

Harris English continued his impressive play on Tour by moving up to 12-under par in a tie for fourth with Danny Lee and Louis Oosthuizen.

Kevin Kisner and Russell Henley lie five strokes off the pace on 11-under par.