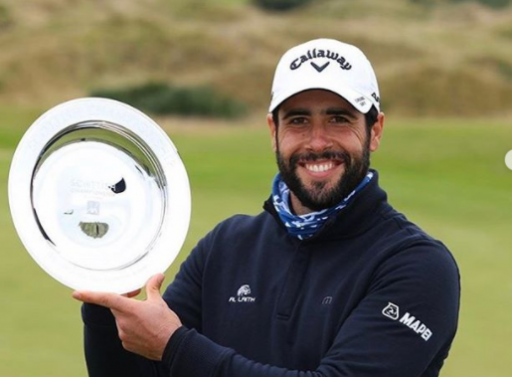 Adrian Otaegui produced one of the putting performances of the season en route to landing his third European Tour title at the Scottish Championship on the Torrance Course at Fairmont St Andrews.

Otaegui, 27, overhauled a four-stroke deficit on Matt Wallace going into the final round with a superb round of 9-under 63 as he stormed to a four-stroke victory on 23-under par.

Laying down the gauntlet

He just can't miss with the putter this week.#AXAScottishChamps pic.twitter.com/vxG3Ek7OwJ

Social media was gripped by Otaegui's putting, especially the Spaniard's bizarre new routine where he stands over the ball and then raises his putter to the sky with both hands before placing it back down behind the ball.

Otaegui, who is mentored by golf legend Jose Maria Olazabal, rattled home five birdies on the opening nine to take the outright lead, and despite making bogey at the 10th, he then drained four birdies in the space of five holes to take full control of the tournament.

His third European Tour title marks a first strokeplay win as both his previous victories were in matchplay events at the 2017 Paul Lawrie Match Play and 2018 Belgian Knockout.

"This feels really good," said Otaegui. "I had some very important putts on the back nine, and it felt very good."

"I know I have been doing good work the last few weeks. I didn't know if it would be this week, but I felt the win was coming."

Wallace will be kicking himself to miss out on a fifth European Tour title, especially after owning a three-stroke lead over Garrick Porteous heading into the final round.

The Englishman fell out of the blocks with a bogey at the first when driving behind a wall, and he failed to build any momentum for much of the day as he watched his playing partner Otaegui roll in the birdies for fun.

Wallace went on to take solo second on 19-under par, resulting in his best finish of the year so far. It was also his first top-10 finish of the season.

The four-time European Tour champion had been delighted with how he closed out his third round on Saturday when finishing birdie-birdie to build a three-stroke lead, aided by a hole out from the greenside bunker and a celebratory robot dance.

"Graham, that one's for you baby"

Aaron Rai continued his impressive run of form as he finished the week on 17-under par in solo third.

Porteous did his best to keep pace with Otaegui on the back nine but he endured a wretched finish to his round with a double bogey at 16 and bogey at 17 to fall back to 16-under par in a tie for fourth with Chris Paisley.