Wouldn't it be great to see this video happen in real life... 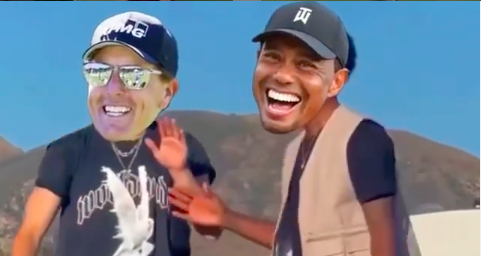 For many years now, we have seen Tiger Woods and Phil Mickelson battle it out on the PGA Tour with over 120 titles to their names.

Much to our anticipation, we have never seen them perform a dance or a musical number together. But luckily, the wonders and creativity of social media have given us the opportunity to see exactly this.

A video was posted on Instagram of two people performing a hip hop dance with a twist. The two legends of golf had their faces photoshopped into the video to look as though they were dancing.

As we have all found out this season, Mickelson is no stranger to entertaining his fans on social media so I wouldn't be surprised if he made this hip hop number a reality.

As for Woods, I think we would all like to see the 15-time major champion back on the golf course as soon as possible, as opposed to the dance floor.

Nonetheless, if Woods has managed to see this video, I'm sure it has brought him a lot of laughter while he continues to recover from his car accident.

"I’ve watched this a million times," one fan said.

"This is so satisfying," one fan commented.

"When you got 18 booked everyday over the weekend" another fan said.

"I wonder if Tiger and Phil get to see these videos," another fan commented.

"This is incredible..." one fan said.