Golfer takes a SPLASH after attempting jump over water

I bet this golfer was instantly full of regret... 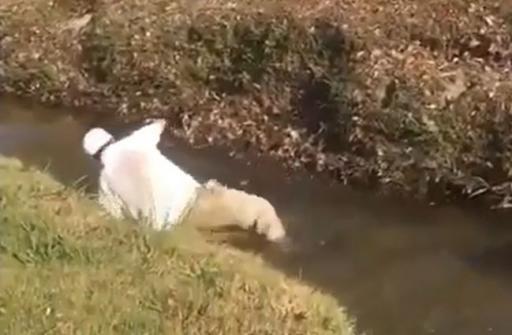 Everyone loves an epic fail video but for some reason they just seem a lot sweeter when they happen on the golf course.

For some reason, this golfer thought he was an Olympic long jump athlete and decided to attempt a run and jump over a ditch with a stream running through the middle of it.

RELATED: Golfer gets a pitch mark repair tool STUCK IN HIS LEG after trying to kick it

Now in all fairness he did technically make it over the ditch, but instead of landing with graceand athleticism, this golfer's legs just locked as soon as his feet made contact with the steep bank, causing him to fall backwards and straight into the water.

Watch this golfer take a splash in the video below, posted on the Golf Gods Instagram page:

He almost made it!

Golf fans were quick to react to the video in the comments section.

"Funny how the weekend hacks think they have athletic ability lmfao."

RELATED: Paige Spiranic's new golf top gets a lot of attention on Instagram!

"His legs locked so hard I think they were gonna snap."

"So unathletic. These are the guys that have enough money to lose some to me on the course..."

"Was painful to watch the way he landed."

"Me every time trying to hit the green over water."

"At least the ball didn’t end up in the drink."

NEXT PAGE: Golfer gets a LADDER to play his shot from the bunker!