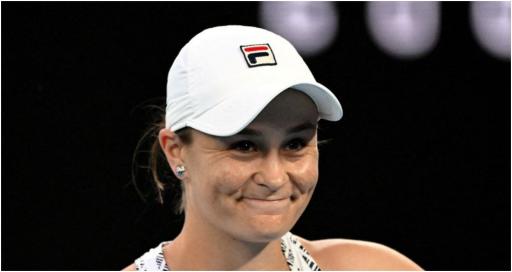 Barty schocked the sporting world when she announced her retirement from tennis at the tender age 25.

The Australian said she had "nothing left to give" just weeks after she had secured her third Grand Slam title.

Barty said in her retirement interview on Instagram that she was leaving the sport to chase other dreams.

Webb, 47, a seven-time major champion who will captain the Australia's golf teams at the 2024 Paris Olympics, tipped Barty for big things.

"I don't see Ash wanting to do a sport where she has to travel the world, I think that's part of what she didn’t like about tennis, being away from Australia," she said.

"[But] I wouldn't put it past her to be Australian amateur champion one day."

Webb added: "I can see her working on her game and being good enough to be one of the best players in Australia."

Barty was also asked by the media before about her chances of reaching the LPGA Tour.

But she said: "No, we'll wait and see. I got to try and learn how to hit the middle of the club face before I can think of trying to get on the tour."

The World No. 1 is currently Jin Young Ko. The Korean star has been on a hot streak winning six times out of her previous 10 starts on the LPGA Tour.

Webb, who has won 41 times on the LPGA Tour, added of Barty: "I don’t think I'll need to get in her ear to get her to start playing more golf.

"I think Ash will definitely get into her golf now.

I only got the opportunity to play with her once and it wasn't going to take much for her to be kicking my butt."