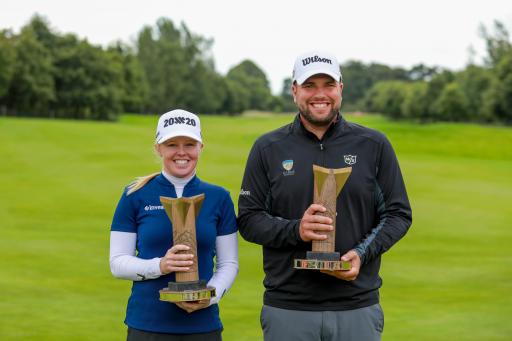 Galgorm Castle Golf Club witnessed high drama until the final putt was holed as Meadow showed real nerve to earn victory ahead of the charging Hull, securing a one-shot victory, before Senior triumphed with a birdie on the second extra hole.

Northern Ireland’s Meadow carded a level par round of 73, which included back-to-back birdies on the tenth and 11th holes after a double bogey on the ninth, to stay at her third round total of ten under par and finish one shot clear of Hull in second, who put together a four under par round of 69.

After Senior’s birdie on the 72nd hole ensured he would contest a play-off against Baldwin, who signed for the low round of the day with a six under 67, the Galgorm crowds were almost faced with the prospect of a double play-off with Hull hunting down Meadow.

However, after the Solheim Cup player stiffed a three-wood approach to six feet, her eagle putt slid past the hole which allowed Meadow to secure victory with a par.

With the destination of the women’s title decided, Senior and Baldwin returned to the 18th tee after both finishing on 11 under par, two shots clear of Todd Clements in third place.

After both finding the rough from the tee and eventually going down for par, they returned for a second trip down the final hole.

Baldwin took three shots to reach the green before needing three more strokes to eventually go down for bogey, leaving Senior with a six-foot putt for victory which he duly holed before celebrating with girlfriend and caddy Beth in front of the packed grandstand.

Following his victory, Senior jumps from 58th to 11th on the Challenge Tour Rankings and in doing so earns a spot in next week’s limited field Rolex Trophy in Geneva.

Meadow, meanwhile, will jet across the Atlantic Ocean to compete in the CP Women’s Open in Canada on the LPGA Tour.

Cormac Sharvin and Leona Maguire each picked up the Bridgestone award and £250 each for finishing as the leading Irish players under 30. Kildare amateur Lauren Walsh and South Africa’s Jayden Trey Schaper won the amateur men and women prizes.

"I’m so excited and honoured as well. I want to thank ISPS Handa and Modest! for giving me the opportunity to come home and compete at home – and win at home! It’s very, very special.

"I got a pretty bad bounce off the tree at the ninth and went into some pretty nasty stuff and had to take a drop. I still didn’t have a shot to the green. I’ve definitely hit worse shots this week and ended up okay, but that’s just golf. I told myself that and was able to birdie ten and got back rolling it. I think that was really key to not freak out or panic."

Jack Senior said: "It’s great to get it over the line. I’ve been close a couple of times this year but to finally get it done means a lot. I’d like to say thank you to ISPS Handa and the Modest! guys – they’ve done a great job again of running this golf tournament.

"I’ve been in three play-offs before and won all three, so keep the play-offs coming I say! You should feel a bit relaxed coming into a play-off because no matter what happens, you’ve still had a really good week so it takes the pressure off a little bit.

"I’m a big leaderboard watcher so I knew what I needed to do coming down the last. I think when I know what I need to do, I play my best golf.

"I’ve been mixed between the European Tour and Challenge Tour this year and it’s always difficult to make a decision on what to do. I had the opportunity to go and play in Prague this week but I said at the start of the season that August was going to be crunch time for me in terms of what Tour to play on.

"I feel like I’ve made the right decision this week with getting the win and no matter what level you win at, it’s always great to do it."

Previous
FedEx Cup: Here's where every player will start at Tour Championship
Next
Golfers get lifesaving support from new Motocaddy app