Justin Thomas reclaimed the World No.1 spot after winning the WGC-FedEx St Jude Invitational on Sunday. 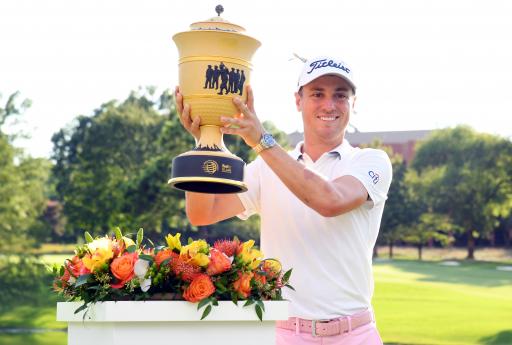 The 27-year-old shot a 5-under par final round of 65 to win the tournament by three shots, with four players sharing second place after Brooks Koepka collapsed with a double bogey at the last.

Thomas went into Sunday's final round four strokes off the lead, in fifth place and with in-play odds of 8/1 to win the event at TPC Southwind, but climbed the leaderboard after playing an intelligent and calculated round.

The win takes Thomas back to the pinnacle of the Official World Golf Ranking, dethroning Jon Rahm as World No.1, who had a disappointing week finishing in T52, whilst World No.3 Rory McIlroy came T47.

Brooks Koepka who looked back to his best throughout the week put up a fight as the defending champion and it looked as though it would come right down to the wire, until a costly mistake at the par-5 16th resulted in a two-shot swing.

The four-time major champion bounced back with a birdie at the 17th when Koepka drained a long putt from just off the edge of the green, but after finding the water off the tee at the last, the 30-year-old made a double bogey that saw him fall from solo second to T2, costing $455,000.

Joining Koepka in T2 was Englishman Tom Lewis who carded a 4-under par final round, along with Phil Mickelson and Daniel Berger, GolfMagic's each-way betting tip for the week.

Thomas found himself 2-under through his first three holes after making birdies at the 2nd and 3rd, before adding another two before the turn at the 7th and 9th.

The 12th hole saw Thomas make his only bogey of the day which allowed others to take advantage, but the American bounced back with back-to-back birdies at the 15th and 16th, which he followed up with a par at 17.

A wayward tee shot at the par-4 18th put Thomas in a tricky spot, with over 200 yards into the green from the rough. Thomas' approach went long and slightly right, finding the short grass just past the green.

Thomas faced an awkward third with a chip onto a fast green with water the other side, but he showed his class with a delicate shot that left a tap-in for par.

Beautiful touch from @JustinThomas34 on 18.

Thomas becomes the third youngest player to win 13 PGA Tour titles and goes into this week's US PGA Championship at Harding Park as the favourite.